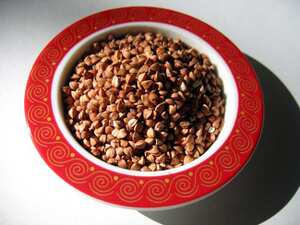 Buckwheat is not a grass (and are therefore considered pseudocereals) and is not related to wheat.

Buckwheat contains no gluten, and can thus be eaten by people with coeliac disease or gluten allergies. Many bread-like preparations have been developed.

The seed can be sprouted, ground and used as flour or prepared in a similar way to couscous.

The fruit is an achene, similar to sunflower seed, with a single seed inside a hard outer hull. The starchy endosperm is white and makes up most or all of buckwheat flour. The seed coat is green or tan, which darkens buckwheat flour. The hull is dark brown or black, and some may be included in buckwheat flour as dark specks. The dark flour is known (exaggeratedly) as "blé noir" ("black wheat") in French.

Buckwheat pancakes, sometimes raised with yeast, are eaten in several countries. They are known as buckwheat blinis in Russia, galettes in France (where they are especially associated with Brittany), ployes in Acadia and boûketes in Wallonia.

Buckwheat noodles play a major role in the cuisines of Japan (soba), Korea (naengmyeon, makguksu and memil guksu) and the Valtellina region of Northern Italy (pizzoccheri). Soba noodles are the subject of deep cultural importance in Japan. In Korea, before wheat flour being replaced for making guksu, the generic term referring to noodles, buckwheat noodles were widely eaten as hot dishes. The difficulty of making noodles from flour that has no gluten has resulted in a traditional art developed around their hand manufacture.

How much does one cup of buckwheat groats (kasha) weigh?