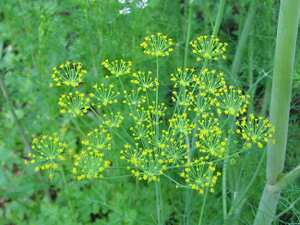 Dill is a short lived annual herb that belongs to the umbelliferae family which also includes many of our nicest herbs including fennel, parsley, coriander, cumin, caraway and many more. As young plants dill and fennel are indistinguishable apart from the smell of crushed leaves.

Fresh and dried dill leaves (sometimes called "dill weed" to distinguish it from dill seed) are used as herbs.

Its fern like leaves are aromatic and are used to flavour many foods, such as gravlax (cured salmon), borscht and other soups, and pickles, especially dill pickles (where sometimes the dill flower is used). Dill is said to be best when used fresh, as it loses its flavour rapidly if dried; however, freeze dried dill leaves preserve their flavour relatively well for a few months.