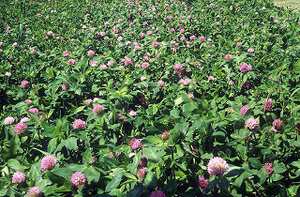 Clover (Trifolium), or trefoil, is a genus of about 300 species of plants in the pea family Fabaceae. The genus has a cosmopolitan distribution; the highest diversity is found in the temperate Northern Hemisphere, but many species also occur in South America and Africa, including at high altitudes on mountains in the tropics. They are small annual, biennial, or short lived perennial herbaceous plants.

Clovers are a valuable survival food, as they are high in protein, widespread, and abundant. They are not easy to digest raw, but this can be easily fixed by juicing them or boiling them for 5-10 minutes. Dried flowerheads and seedpods can also be ground up into a nutritious flour and mixed with other foods. Dried flowerheads can also be steeped in hot water for a healthy, tasty tea.

The isoflavones and phytoestrogens from Red Clover have been used to treat the symptoms of menopause. Women who are pregnant or breastfeeding should avoid ingesting Red Clover. It has also been reported that red clover can be used for therapeutic purposes for coughs, bronchitis, eczema, sores, scrofula and can be gargled for mouth ulcers and sore throats. It has been shown to contain compounds like caffeic acid that starve tumors and reduce inflammation.

It is also an ingredient in eight-herb essiac tea.