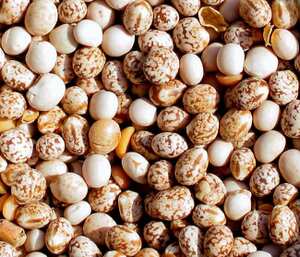 Lupin, often spelled lupine in North America, is the common name for members of the genus Lupinus in the pea (legume) family - Fabaceae. The genus comprises between 200-600 species, with major centres of diversity in South America, western North America , the Mediterranean region and Africa.

The yellow legume seeds of lupins, commonly called lupin beans, were popular with the Romans, who spread the plant's cultivation throughout the Roman Empire; hence common names like lupini in Romance languages. Lupin beans are commonly sold in a salty solution in jars (like olives and pickles) and can be eaten with or without the skin. Lupins are also cultivated as forage and grain legumes.

Lupini dishes are most commonly found in Mediterranean countries, especially in Portugal, Egypt, and Italy, and also in Brazil and in Spanish Harlem, where they are popularly consumed with beer. The Andean variety of this bean is from the Andean Lupin (tarwi, L. mutabilis) and was a widespread food in the Incan Empire. The Andean Lupin and the Mediterranean L. albus (White Lupin), L. angustifolius (Blue Lupin) and Lupinus hirsutus are also edible after soaking the seeds for some days in salted water. They are known as altramuz in Spain and Argentina. In Portuguese the lupin beans are known as tremoços, and in Antalya (Turkey) as tirmis. Lupins were also used by Native Americans in North America, e.g. the Yavapai people. 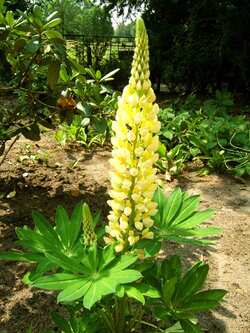 These lupins are referred to as sweet lupins because they contain smaller amounts of toxic alkaloids than the bitter lupin varieties. Newly bred variants of sweet lupins are grown extensively in Germany; they lack any bitter taste and require no soaking in salt solution. The seeds are used for different foods from vegan sausages to lupin-tofu or baking-enhancing lupin flour. Given that lupin seeds have the full range of essential amino acids and that they, contrary to soy, can be grown in more temperate to cool climates, lupins are becoming increasingly recognised as a cash crop alternative to soy.

Three Mediterranean species of lupin, Blue Lupin, White Lupin and Yellow Lupin (L. luteus) are widely cultivated for livestock and poultry feed. Both sweet and bitter lupins in feed can cause livestock poisoning. Lupin poisoning is a nervous syndrome caused by alkaloids in bitter lupins, similar to neurolathyrism. Mycotoxic lupinosis is a disease caused by lupin material that is infected with the fungus Diaporthe toxica; the fungus produces mycotoxins called phomopsins, which cause liver damage. Poisonous lupin seeds cause annually the loss of many cattle and sheep on western American Ranges.

On 22 December 2006, the European Commission submitted directive 2006/142/EC, which amends the EU foodstuff allergen list to include "lupin and products thereof".