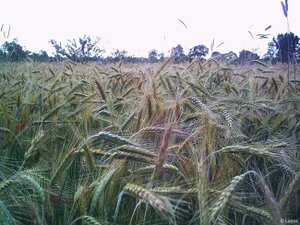 A field of rye

Rye (Secale cereale) is a grass grown extensively as a grain and forage crop. It is a member of the wheat tribe (Triticeae) and is closely related to barley and wheat. Rye grain is used for flour, rye bread, rye beer, some whiskies, some vodkas, and animal fodder. It can also be eaten whole, either as boiled rye berries, or by being rolled, similar to rolled oats.

Rye is a cereal and should not be confused with ryegrass which is used for lawns, pasture, and hay for livestock.

Rye bread, including pumpernickel, is a widely eaten food in Northern and Eastern Europe. Rye is also used to make the familiar crisp bread. Rye flour has a lower gluten content than wheat flour, and contains a higher proportion of soluble fibre.