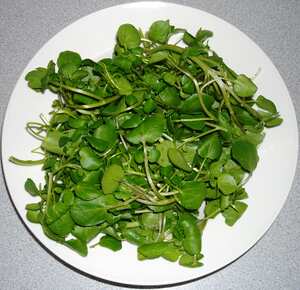 Watercress or cress, (Nasturtium officinale, N. microphyllum; formerly Rorippa nasturtium-aquaticum, R. microphylla) are fast-growing, aquatic or semi-aquatic, perennial plants native from Europe to central Asia, and one of the oldest known leaf vegetables consumed by human beings. These plants are members of the Family Brassicaceae or cabbage family, botanically related to garden cress and mustard — all noteworthy for a peppery, tangy flavour.

If you needed a substitute for watercress then many varieties of cabbage would do as they have a similar peppery taste, albeit with a tougher texture.

Watercress is at its best and in season during the following months: April, May, June, July, August, September & October.