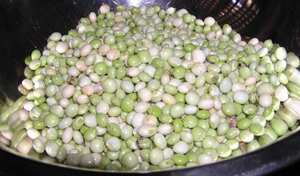 A bowl of pigeon peas

The cultivation of the pigeon pea goes back at least 3000 years. The centre of origin is most likely Asia, from where it travelled to East Africa and by means of the slave trade to the American continent. Today pigeon peas are widely cultivated in all tropical and semi-tropical regions of both the Old and the New World. Pigeon pea is a perennial which can grow into a small tree

Pigeon pea is an important grain legume crop of rainfed agriculture in the semi-arid tropics. The Indian subcontinent, Eastern Africa and Central America, in that order, are the world's three main pigeon pea producing regions. Pigeon pea is cultivated in more than 25 tropical and sub-tropical countries, either as a sole crop or intermixed with such cereals as sorghum (Sorchum bicolor), pearl millet (Pennisetium glaucum), or maize (Zea mays), or with legumes, e.g. peanut (Arachis hypogaea). Being a legume, pigeon pea enriches soil through symbiotic nitrogen fixation.

Pigeon peas are both a food crop (dried peas, flour, or green vegetable peas) and a forage/cover crop. The dried peas may be sprouted briefly, then cooked, for a flavour different from the green or dried peas. Sprouting also enhances the digestability of dried pigeon peas via the reduction of indigestible sugars that would otherwise remain in the cooked dried peas.

In India, split pigeon peas (toor dal) are one of the most popular pulses—along with chickpeas (chana), urad and mung. It is also called 'tuvara parippu' in Kerala. In south India a popular dish sambhar is made with this. Dal is also made with pigeon peas.

Pigeon peas are nutritionally important, as they contain high levels of protein and the important amino acids methionine, lysine, and tryptophan. In combination with cereals, pigeon peas make a well-balanced human food.