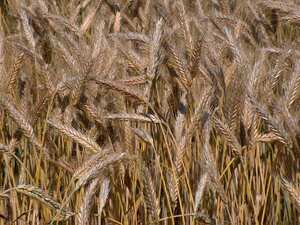 Triticale (× Triticosecale) is a hybrid of wheat (Triticum) and rye (Secale) first bred in laboratories during the late 19th century. The grain was originally bred in Scotland and Sweden. Commercially available triticale is almost always a 2nd generation hybrid, i.e. a cross between two kinds of triticale (primary triticales). As a rule, triticale combines the high yield potential and good grain quality of wheat with the disease and environmental tolerance (including soil conditions) of rye. Only recently has it been developed into a commercially viable crop. Depending on the cultivar, triticale can more or less resemble either of its parents. It is grown mostly for forage or animal feed although some triticale-based foods can be purchased at health food stores or are to be found in some breakfast cereals.

The word 'triticale' is a fusion of the latin words triticum (or wheat) and secale (rye). When crossing wheat and rye, wheat is used as the female parent and rye as the male parent (pollen donor). The resulting hybrid is sterile and thus has to be treated with the alkaloid chemical colchicine to make it fertile and thus able to reproduce itself.

The primary producers of triticale are Germany, France, Poland, Australia, China and Belarus. In 2005, according to the Food and Agriculture Organization (FAO), 13.5 million tons were harvested in 28 countries across the world.