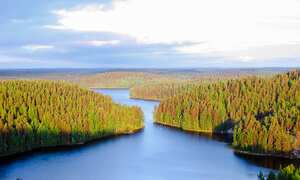 In this category you will find Finnish recipes.

Finnish cuisine is notable for generally combining traditional country fare and haute cuisine with contemporary continental style cooking. Fish and meat (usually pork, beef or reindeer) play a prominent role in traditional Finnish dishes in some parts of the country, while the dishes elsewhere have traditionally included various vegetables and mushrooms. Refugees from Karelia contributed to foods in other parts of Finland.

Finnish foods often use wholemeal products (rye, barley, oats) and berries (such as blueberries, lingonberries, cloudberries, and sea buckthorn). Milk and its derivatives like buttermilk are commonly used as food, drink or in various recipes. Various turnips were common in traditional cooking, but were replaced with the potato after its introduction in the 18th century.

In former times, the country's harsh climate meant that fresh fruit and vegetables were largely unavailable for nine months of the year, leading to a heavy reliance on staple tubers (initially turnip, later potato), dark rye bread and fermented dairy products, occasionally enlivened with preserved fish and meat. Traditionally, very few spices other than salt were available, and fresh herbs like dill were limited to the summer months. Many Finnish traditional dishes are prepared by stewing them for a long time in an oven, which produces hearty but bland fare. Forests and lakes were historically a major source of food, and produce from forests currently accounts for the distinctive traits in Finnish cuisine. The simplicity of traditional Finnish food has been turned into an advantage by shifting the emphasis to freshness. Modern Finnish restaurateurs now blend high-quality Finnish products with continental cooking techniques. This approach helped Helsinki's Chez Dominique to receive two Michelin stars in 2003 (the restaurant closed in 2013).

Finnish cuisine is very similar to Swedish cuisine. In fact, Swedish dishes like Janssons frestelse (janssoninkiusaus), pytt i pannu, and gravlax are common in Finland. The overarching difference is the Finns' preference for unsweetened foods. For example, while traditional Swedish rye bread includes plenty of syrup and spices, Finnish rye bread is unsweetened, even bitter. Finnish cuisine also bears some resemblance to German and Russian cuisines. Sausages and buttered bread (like Butterbrot), and kiisseli (kissel) and karjalanpiirakka are similar to their respective German and Russian counterparts. Finnish recipes, however, tend to favour fresh ingredients over canned or pickled foods as fresh vegetables, fish, and meat are available throughout the year

We have the following Finnish cheese category, though we could do with some help with the images as some of these are difficult to obtain in the United Kingdom. 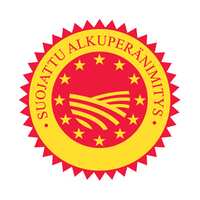 SAN stands for Suojattu Alkuperänimitys which in the UK we know as Protected Designation of Origin (PDO). Under the EU agricultural product quality policy, this "covers agricultural products and foodstuffs which are produced, processed and prepared in a given geographical area using recognised know-how". The following Finnish ingredients are those which are registered as SAN. 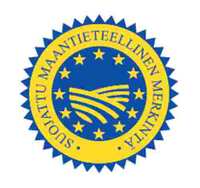 SMM stands for Suojattu Maantieteellinen Merkintä which in the UK we know as Protected Geographical Indication (PGI). Under the EU agricultural product quality policy, this "covers agricultural products and foodstuffs closely linked to the geographical area. At least one of the stages of production, processing or preparation takes place in the area." The following Finnish ingredients are those which are registered as SMM. 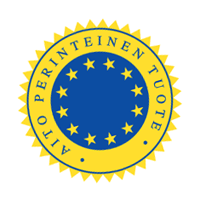 APT stands for ‘Aito Perinteinen Tuote’ which in the UK is known as 'Traditional Speciality Guaranteed’ (TSG). It "highlights traditional character, either in the composition or means of production". The following Finnish ingredients are those which are registered as APT.