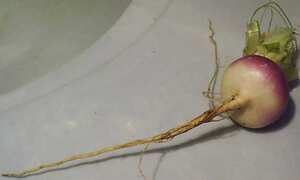 The turnip, a member of the cabbage (Brassica) family, is a root vegetable commonly grown in temperate climates worldwide for its white, bulbous taproot. Small, tender, varieties are grown for human consumption, while larger varieties are grown as feed for livestock.

Pliny the Elder writes that he considered the turnip one of the most important vegetables of his day, rating it "directly after cereals or at all events after the bean, since its utility surpasses that of any other plant." Pliny praises it as a source of fodder for farm animals, and this vegetable is not particular about the type of soil it grows in and because it can be left in the ground until the next harvest, it "prevents the effects of famine" for humans.

In Turkey, particularly in the area near Adana, turnips are used to flavour şalgam, a juice made from purple carrots and spices served ice cold.

The Macomber turnip is featured in one of the very few historic markers for a vegetable, on Main Road in Westport, Massachusetts.

Old turnips need to be peeled but young ones can just be scrubbed with a pan scourer. Top and tail them and boil with potatoes until you can get a knife into them. Make mashed potatoes using 50/50 potatoes and turnips. They can be cooked with carrots but need to be cut about the same thickness. Grate young turnips over a salad for a sweet crunch. Roast them with roast potatoes, again keeping the sizes similar.

How much does one cup of turnips weigh?

Turnips are at their best and in season during the following months: June, July, August, September, October, November, December & January.