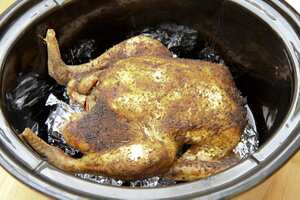 Proper roast chicken, cooked only in a slow cooker - you would not think it was possible, but it is!

A slow cooker or Crock-Pot (a trademark often used generically) is a countertop electrical cooking appliance that maintains a relatively low temperature (compared to other cooking methods, e.g., baking, grilling, or frying) for many hours, allowing unattended cooking of pot roasts, stews, and other suitable dishes. They are usually not suited to some purposes such as baking (but see Recipes below). Recipes intended for other cooking methods must be modified for slow cookers. Often water must be decreased, as ordinary cooking at higher temperatures requires enough liquid to allow for evaporation, whilst slow cookers prevent vapour loss. Some slow cookers are supplied with dedicated recipe booklets; and many such recipes are to be found in general cookbooks and on the Internet. Some of these books provide recipes for making complete dishes in a slow cooker using fewer than five ingredients ("just bung 'em in, switch on and forget about it!"), while others treat the slow cooker as a serious piece of culinary equipment capable of producing gourmet meals.

With some experience, timing and recipe adjustments can be successfully made for many recipes not originally intended for these cookers. The long, moist nature of the cooking method gives good results with cheaper (and tougher) cuts of meat. If excessive liquid is present at the end of cooking, it can be reduced and concentrated by rapid boiling in a saucepan. According to a few manufacturers and other sources, even cakes can be prepared in a slow cooker and the Internet offers a large number of free recipes sites. However, none of the CP editors (or contributors as far as we know - let us know if you think different) have ever done this or tasted the results so it may be a case of "it's cake, Jim, but not as we know it!!".

Even with foods that are not overtly damaged from boiling, the temperature in a slow cooker is low enough to avoid badly overcooking food even if cooked for far longer than necessary. However, success does depend to some extent on timing, as in all cooking. Meat will become nearly tasteless or "tasting like dishcloth" if overcooked.

The long cooking time can be an advantage: food can be set to slow-cook before leaving for a going to work and it will be ready on getting home; an inexpensive timer can also be used if necessary, and sometimes this can even be a built-in feature. If you are on a tariff with cheap night-time electricity, overnight cooking is then of course cheaper.

Cooking the meal in a single pot reduces washing up, and the low cooking temperature and glazed pot make cleaning it very easy.

Vitamins and other trace nutrients are lost, particularly from vegetables, partially by enzyme action during cooking. When vegetables are cooked at higher temperatures these enzymes are rapidly denatured and have less time in which to act during cooking. Since slow cookers work at temperatures well below boiling point and do not rapidly denature enzymes, vegetables tend to lose their goodness. Blanched vegetables, having been exposed to very hot water, have already had these enzymes rendered largely ineffective, so a blanching or sauteing pre-cook stage will leave more vitamins intact. Green colours are retained better when vegetables are cooked quickly as the chlorophyll is "fixed".

Slow cookers do not provide sufficient heat to compensate for loss of moisture (and heat due to frequently removing the lid, e.g. in order to add and remove food in so-called 'perpetual' stews, such as pot au feu & olla podrida). Added ingredients must be given time to cook before the food can be eaten. If the food is allowed to cool below about 70°C / 158°F and not reheated, toxic bacterial growth is possible; some toxins, once present, are not destroyed by later heating.

Some people rather unkindly refer to slow cookers as a 20 watt lightbulb in a biscuit tin, but we at Cookipedia do not wish to endorse this view.

Raw kidney beans, and some other beans, contain a toxin, called phytohaemagglutinin, which is destroyed by boiling for at least ten minutes, but not by the operating temperature of a slow cooker. Raw beans must be boiled for the time indicated on the packet prior to slow cooking to avoid food poisoning; canned beans do not require this, as they have already been treated sufficiently during processing at the factory. Even a few single beans can be toxic, and beans can be as much as five times more toxic if cooked at 80°C (175°F) than if eaten raw, so adequate pre-boiling is vital. Cases of poisoning by slow-cooked beans have been published in the UK; poisoning has occurred in the USA but has not been formally reported.

I was initially sceptical, often being unsure that food would cook properly, especially when on low. However, after roasting a whole chicken in a slow cooker (8 hours on low), my fears have been totally allayed!

The best of both worlds: A slow cooker and a sous vide cooker

How much does a VonShef 8 in 1 Multi Slow Cooker 5.5L Stainless Steel weight

For my own reference, handy when weighing out cooked contents, our slow cooker weighs 1453g when empty, without lid.

From a few very crude experiments with a slow cooker filled with water, it appears that the equivalent temperature ranges of a slow cooker are fairly similar to the same descriptive terms for normal oven settings.

These temperatures should only be used as rough guidelines because different slow cookers work in different ways, some inexpensive models do not even have thermostats.

The following 47 pages are in this category, out of 47 total.