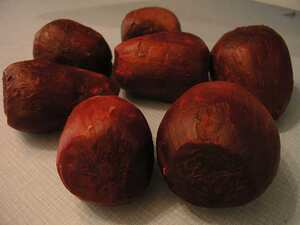 The usually deep-red roots of garden beet are eaten boiled either as a cooked vegetable, or cold as a salad after cooking and adding oil and vinegar. A large proportion of the commercial production is processed into boiled and sterilised beets or into pickles. In Eastern Europe beet soup, such as cold borscht, is a popular dish. Yellow coloured garden beets are grown on a very small scale for home consumption.

One increasingly popular preparation involves tossing peeled and diced beets with a small amount of oil and seasoning, then roasting in the oven until tender.

How much does one cup of beetroot weigh?

Beetroots are at their best and in season during the following months: July, August, September, October, November, December & January.