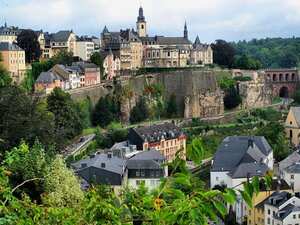 In this category you will find recipes which have their roots in Luxembourg .

Luxembourg's position on the border between the Latin and Germanic worlds is heavily influenced by the cuisines of neighbouring France and Germany. More recently, it has had influence from its many Italian and Portuguese immigrants. Most native dishes share roots in the Luxembourgian peasantry, similar to German cuisine and in marked contrast to more sophisticated French.

Luxembourg has many delicacies: pastries, Luxembourg Cheese, the fresh fish from local rivers (trout, pike, and crayfish), Ardennes ham smoked in saltpetre, game during hunting season (such as hare and wild boar), small plum tarts in September (quetsch), smoked neck of pork with broad beans (judd mat gaardebounen), fried small river fish (such as bream, chub, gudgeon, roach, and rudd), calves' liver dumplings (quenelles) with sauerkraut and boiled potatoes, black pudding (treipen) and sausages with mashed potatoes and horseradish, and Green beans soup (Bouneschlupp). French cuisine is featured prominently on many menus as are those of Germany and Belgium but not as much as French. 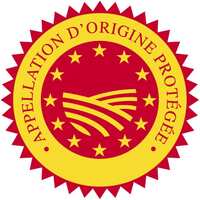 AOP stands for ‘Appellation d'Origine Protégée’ which in the UK we know as 'Protected Designation of Origin' (PDO). Under the EU agricultural product quality policy, this "covers agricultural products and foodstuffs which are produced, processed and prepared in a given geographical area using recognised know-how". The following Luxembourger ingredients are those which are registered as AOP.

Clicking here to expand/collapse the complete table of AOP Ingredients 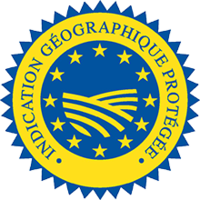 IGP stands for ‘Indication Géographique Protégée’ which in the UK we know as 'Protected Geographical Indication' (PGI). Under the EU agricultural product quality policy, this "covers agricultural products and foodstuffs closely linked to the geographical area. At least one of the stages of production, processing or preparation takes place in the area." The following Luxembourger ingredients are those which are registered as IGP.

Clicking here to expand/collapse the complete table of IGP Ingredients

The following 11 pages are in this category, out of 11 total.