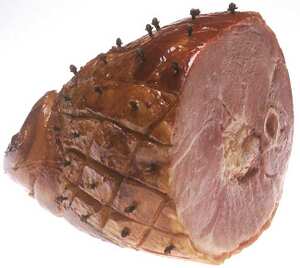 Ham is the thigh and rump of pork, cut from the haunch of a pig or boar. Although it may be cooked and served fresh, most ham is cured in some fashion. Cuts referred to as 'ham' in the US are called 'gammon' in the UK and Ireland.

Ham can be dry cured or wet-cured. A dry-cured ham has been rubbed in a mixture containing salt and a variety of other ingredients (usually various proportions of sodium nitrate and sodium nitrite). This is followed by a period of drying and ageing. dry cured hams may require a period of rehydration prior to consumption. A wet-cured ham has been cured with brine, either by immersion or injection. The distinction between wet and dry cure is not always clear cut as some ham curing methods begin wet but are followed by dry ageing.

dry cured varieties include Italian prosciutto (prosciutto di Parma, prosciutto di San Daniele, prosciutto di Carpegna, prosciutto di Modena, prosciutto Toscano, prosciutto Veneto Berico-Euganeo, Valle d’Aosta Jambon de Bosses, prosciutto di Norcia) and the Spanish jamon serrano and jamón ibérico. The United States has country ham (including Virginia ham), which might or might not be smoked. England has York ham. Germany's Westphalian ham is usually smoked over juniper, in Belgium there is the smoked Ardennes ham, and from China there is the un smoked Jinhua ham. In Bulgaria, the specific Elenski but is produced. From Iran, we get the dry cured Zard Kūh ham.

Ham is also processed into other meat products such as Spam (luncheon meat). Also, a processed form of ham is commonly sold in tins or 'cans'.

Bayonne Ham or Bayonne is an air dried salted ham that takes its name from the ancient port city of Bayonne in the far South West of France (Le Pays Basque or the Basque country).

Jambon de Paris is a wet-cured, boneless ham and baked in shape. The ham is a superior quality product prepared from fresh, unfrozen pork thighs without adding polyphosphates.

Parma ham, the so called Prosciutto di Parma, has almost 200 producers concentrated in the eastern part of Parma Province. Its production is regulated by a quality consortium that recognises qualifying products with a distinctive mark. Only larger fresh hams are used (12-13 kilograms). Curing uses relatively little salt, but can include garlic salt and sugar thus producing a sweeter meat. After salting, the meat is sealed with pig fat over the exposed muscle tissue which slows drying. Curing occurs over a minimum of 12 months. This curing method uses only salt, without nitrates and without spices. No conserving substances are added. San Daniele ham (Prosciutto di San Daniele) is the most similar to Parma ham, especially regarding the low quantity of salt added to the meat, and is the most prized variety. Other raw hams include the so- called "nostrani" or "nazionali" or "toscani"; they are more strongly flavoured and are produced using a higher quantity of salt.

In Portugal, besides several varieties of wet-cured hams called fiambre (not to be confused with the Guatemalan dish, also called fiambre), the most important type of ham is presunto, a dry cured ham similar to Spanish jamón and Italian prosciutto. There is a wide variety of presuntos in Portugal; among the most famous are presunto from Chaves and presunto from Alentejo (made from the haunches of black Iberian pigs).

In Romania, ham is called şuncă/şonc/jambon. Usually dry cured, always with granular salt, in Transylvania and Banat, paprika might be added. This is because of a tradition dating back to 30 AD. The Romanians considered it an offering of peace to their gods to preserve ham in the cleanest way possible. To let ham or any meat go wasted was considered a severe insult to the gods. 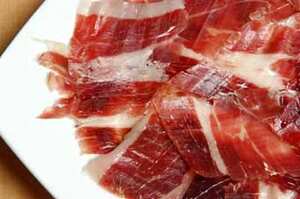 One of the more exacting ham regulatory practices can be found in Spain, where ham is called Jamón. Not only are hams classified according to their preparation, but the pre-slaughter diet and region of preparation are also considered important. Spanish regulators recognise three types of Iberico ham qualities:

The regional appellations of Spanish ham include the following: 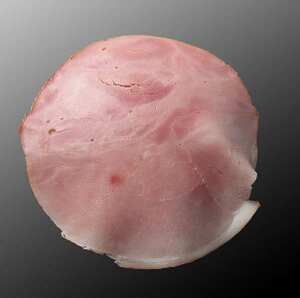 In the United States, ham is regulated primarily on the basis of its cure and water content. The USDA recognises the following categories:

Sugar is common in many dry cures in the United States. The majority of common wet-cured ham available in U.S. supermarkets is of the "city ham" variety, in which brine is injected into the meat for a very rapid curing suitable for mass market. Traditional wet curing requires immersing the ham in brine for an extended period, often followed by light smoking. Traditional wet cured ham includes the English Wiltshire ham and the French Jambon de Paris.

Turkey ham, a boneless product made from pressed dark meat, is a popular low-fat alternative to traditional ham in the US.

How much does one cup of ham weigh?

Usually a gammon joint is cooked by boiling, either in a large saucepan (about 1.5 hours to 2.5 hours depending upon weight), or a quicker method is to cook in a pressure cooker (1 hour). After this process, the gammon will be cooked and perfectly safe to eat, however, often the gammon is then finished by roasted with a glaze (honey, marmalade, Branston pickle, etc. This finishing process does make for an extended cooking time but it does give an exceptional finish.