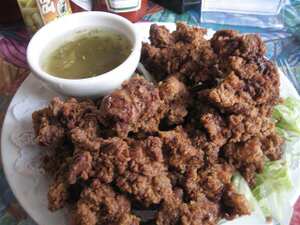 The largest and one of the most important organs, liver has immense nutritional value, providing, that is, that it comes from a fairly young animal. Because liver acts as a clearing house for substances that enter the body, it tends to store and absorb unwanted chemicals, medicines and hormones that an animal might be fed. Naturally, the older the animal the greater the accumulation of these unwanted substances, which, according to some, offset liver's nutritional value. For this very reason, many people choose the more expensive calf's liver over beef liver (Ox liver). There are several ways to distinguish between the two. The colour of beef liver is reddish-brown, compared to the paler pinkish-brown of calf's liver. Liver from a mature animal also has a stronger odour and flavour than that from a youngster. Additionally, it will be less tender.

Besides beef and calf's, the most common animal livers used in cookery are lamb, pork, poultry and goose. The latter used mainly to produce Pâté de foie gras. The strongest-flavoured and least tender of the livers is pork, while poultry livers are the most mild and tender of the lot.

All livers are usually available fresh — beef and chicken livers may also be purchased frozen (though the quality of frozen liver is considerably lower than that of fresh). Look for liver that has a bright colour and moist (not slick) surface. It should have a fresh, clean smell. Refrigerate loosely wrapped for no more than a day.

Liver can be prepared in a variety of ways though quick sautéing is the most popular. Many recipes call for the liver to be cleansed by covering it with milk for an hour and then rinsing the milk off, this removes the sometimes bitter taste. Liver toughens quickly with overcooking.

Liver is rich in iron, protein and vitamin A. 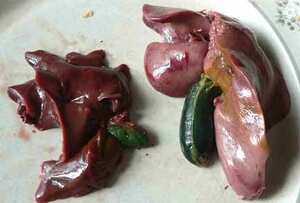 Chicken liver and gallbladder
the origin of this picture

As with chicken meat, the liver can contain a higher than normal level of microbial contamination and should always be properly cooked to avoid food poisoning. Beef and lambs liver can be eaten rare, chicken liver cannot.

To avoid the risk of food poisoning:

If you find a chicken liver with a funny green dill-pickle looking sac attached it's the gallbladder. Remove it without rupturing it and discard it. It is filled with bile which is very bitter tasting. The rest of the liver will be ok to eat.

If the liver is coloured green it is very likely that the gallbladder has burst and the bile has escaped, causing the green discolouration and accompanying bitter taste. Trim and discard any green parts. Wash and rinse well and maybe even clean with milk as described above.