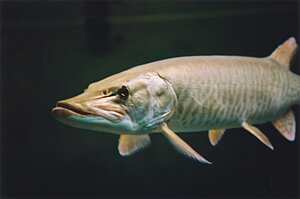 Esox is a genus of freshwater fish, the only living genus in the family Esocidae. The type species is E. lucius, the northern pike. The species of this genus are known as the pikes. The pike is similar, but unrelated to zander

The big pike species are native to the Palearctic and Nearctic ecozones, ranging across northern North America and from Western Europe to Siberia in Eurasia. They have been found in many urban lakes in Western Europe, reported to be in the Rostrum (Lucerne) and the Serpentine, (London).

Pike can grow to a maximum recorded length of 1.83 metres (6 ft), reaching a maximum recorded weight of 35 kilograms (77 lb). Individuals have been reported to reach 30 years in age. They have the elongated, torpedo-like form of predatory fishes, with sharply-pointed heads and sharp teeth. Their colouration is typically grey-green with a mottled or spotted appearance with stripes along its back, perfectly camouflaged among weeds. Individual pike marking patterns are unique, like fingerprints.

The northern pike gets its name from its resemblance to the pole-weapon known as the pike (from the Middle English for pointed). The genus name, Esox, comes from the Greek and Celtic for "big fish" and "salmon". Various other unofficial trivial names are: American pike, common pike, great northern pike, Great Lakes pike, grass pike, slough shark and jackfish.

Pike are normally only available from very specialist fishmongers and as such are generally only available to fishermen. The pike is reputed to have an particular muddy taste, reminiscent of it's habitat. This can be reduced by soaking in a mixture of 10 parts water to 1 part malt vinegar. The flesh is firm, and flaky but the white flesh of the pike contains many small bones. Pike is best eaten fresh, as it takes on a somewhat grainy texture after freezing. Small pike more tender than very large ones.