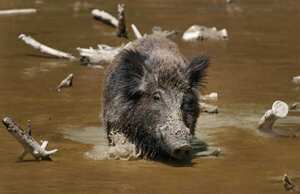 The boar or wild boar (Sus scrofa) is an omnivorous, gregarious mammal of the biological family Suidae. It is native across much of Central Europe, the Mediterranean Region (including North Africa's Atlas Mountains) and much of Asia as far south as Indonesia, and has been introduced elsewhere. It is the wild ancestor of the domestic pig.

Although common in France, the wild boar became extinct in Great Britain and Ireland by the 17th century, but wild breeding populations have recently returned in some areas, particularly the Weald, following escapes from boar farms.

In many countries, boar are farmed for their meat, and in countries such as France, for example, boar (sanglier) may often be found for sale in butcher shops or offered in restaurants. Though wild boar meat is not commonly found, wild boar sausages are available in most large supermarkets.