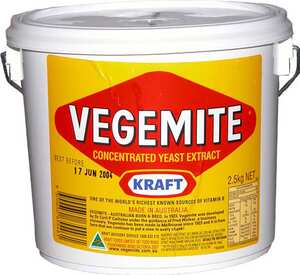 In this category you will find Australian recipes.

Indigenous Australians have occupied the lands of Australia for some 40,000–60,000 years, during which time they developed a unique hunter gatherer diet, known as "bush tucker", drawn from regional Australian flora and fauna—such as the kangaroo. Australia was, from 1788 to 1900, a collection of British colonies in which culinary tastes were strongly influenced by British and Irish traditions - and agricultural products such as beef cattle, sheep and wheat became staples in the national diet. Post-war Australia's multicultural immigration program lead to a diversification of the cuisine of Australia, particularly under the influence of Mediterranean and East Asian migrants. Australian cuisine of the first decade of the 21st century shows the influence of globalisation. Organic and biodynamic, kosher and halal foods have become widely available and there has been a revival of interest in bushfoods. British traditions persist to varying degrees in domestic cooking and the takeaway food sector, with roast dinners, the Australian meat pie and fish and chips remaining popular, but there are also new elements featured in these foods. To barbecue meats in the open air is considered a treasured national tradition. While fast food chains are abundant, Australia's metropolitan centres possess many famed haute cuisine and nouvelle cuisine establishments. Restaurants whose product includes contemporary adaptations, interpretations or fusions of exotic influences are frequently termed "Modern Australian".

Beer in Australia has been popular since colonial times. James Squire is considered to have founded Australia's first commercial brewery in 1798 and the Cascade Brewery in Hobart, Tasmania, has been operating since the early 19th century. Since the 1970s, Australian beers have become increasingly popular globally - with Fosters lager being an iconic export brand. However, Fosters is not the biggest seller on the local market, with alternatives including Victoria Bitter outselling the popular export. Craft beers are also becoming popular, from breweries such as Coopers and Little Creatures.

The Australian Wine Industry is the fourth largest exporter of wine around the world, with 760 million litres a year to a large international export market and contributes $5.5 billion per annum to the nation's economy. There is also a significant domestic market for Australian wines, with Australians consuming nearly 500 million litres of wine per year in the early 21st Century. Wine is produced in every state, with more than 60 designated wine regions totaling approximately 160,000 hectares. Australia’s wine regions are mainly in the southern, cooler parts of the country, in South Australia, New South Wales, Victoria, and Western Australia. Amongst the most famous wine districts are the Hunter Valley and Barossa Valley and among the best known wine producers are Penfolds, Rosemount Estate, Wynns Coonawarra Estate and Lindeman's.

Do you know your Australian cuisine?

This new section is crying out for help from anyone willing to add recipes to this section. Please help us. If you can fill out a web-form, you can help us. Register now and add your recipe. You can also suggest recipes that already exist on Cookipedia.

The following 18 pages are in this category, out of 18 total.