The quantity give here is per lamb chop, You can use shoulder or loin chops. 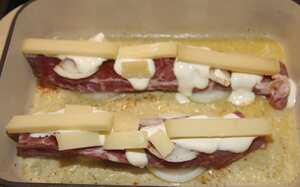 The fillet sitting on the onion slices, ready for the oven

This is usually served on its own.

I made a slight variation on this recipe and it was truly glorious!

For 2 people I used one 360 g lamb fillet cut in half lengthways. I used a tablespoon of butter instead of dripping, one whole large onion, peeled and sliced fairly thickly. The fillet rested on the onion slices with the remaining onion placed on top. I used Gruyère cheese and 4 tablespoons of sour cream.

The fillet was cooked for 30 minutes as stated above, but then only for another 20 minutes covered.

I find gravy made with lamb fat rather cloying and unpleasant so I drained the fat when the fillet was cooked, cut into medallions and served with the lovely caramelised onions. Do ensure you get all of the crispy melted cheese! Instead of gravy, I used the remaining sour cream as a dressing for the boiled potatoes.