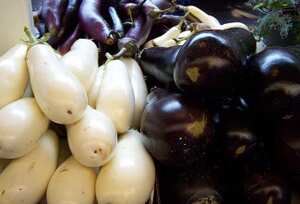 The eggplant, aubergine, or brinjal is a plant of the potato and tomato family (Solanaceae).

The name eggplant developed in because the fruits of some 18th century European cultivars were yellow or white and resembled goose or hen's eggs.

The raw fruit can have a somewhat bitter taste, but becomes tender when cooked and develops a rich, complex flavour. Salting and then rinsing the sliced eggplant (known as "degorging") can soften and remove much of the bitterness. Some modern varieties do not need this treatment, as they are less bitter. The eggplant is capable of absorbing large amounts of cooking fats and sauces, allowing for very rich dishes, but the salting process will reduce the amount of oil absorbed. The fruit flesh is smooth; as in the related tomato, the numerous seeds are soft and edible along with the rest of the fruit. The thin skin is also edible, so that the eggplant need not be peeled.

The eggplant is used in cuisines from Japan to Spain. It is often stewed, as in the French ratatouille, the Italian melanzane alla parmigiana, the Greek moussaka, and Middle-Eastern and South Asian dishes. It may also be roasted in its skin until charred, so that the pulp can be removed and blended with other ingredients such as lemon, tahini, and garlic, as in the Middle Eastern dish baba ghanoush and the similar Greek dish melitzanosalata or the Indian dishes of Baigan Bhartha or Gojju. It can be sliced, battered, and deep-fried, then served with various sauces which may be based on yogurt, tahini, or tamarind. Grilled and mashed eggplant mixed with onions, tomatoes, and spices makes the Indian dish baingan ka bhartha. The eggplant can also be stuffed with meat, rice, or other fillings and then baked. In the Caucasus, for example, it is fried and stuffed with walnut paste to make nigvziani badrijani.

As a native plant, it is widely used in Indian cuisine, for example in sambhar, chutney, curries, and achaar. Owing to its versatile nature and wide use in both everyday and festive Indian food, it is often described (under the name brinjal) as the 'King of Vegetables'. In one dish, Brinjal is stuffed with ground coconut, peanuts, and masala and then cooked in oil.

Aubergines are at their best and in season during the following months: June, July, August, September & October.

How much does one cup of aubergines weigh?