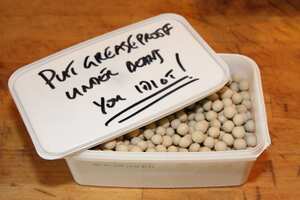 Twice now, I've forgotten to put greaseproof paper under the baking beans. Perhaps this picture will remind me next time!

This in now becoming an obsession - I'm now up to two a day (making quiches, not eating them!)

I love Frankfurters and quiches, so I thought I would combine the two.

The quantity used makes two quiches, but you could obviously halve the amounts if you only wanted to make one.

I guess the obvious thing to include would be mustard, but I wasn't too sure about that so used my favourite instead - Louisiana hot pepper sauce - use Tabasco sauce if you wish.