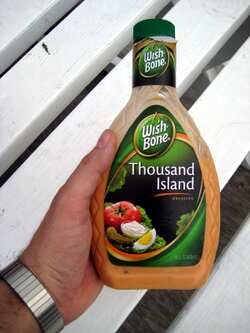 The dressing is used both in salads and burgers and as a sauce on sandwiches or seafood, especially in fast-food restaurants. It tastes (and appears to be) very similar to fry sauce , a 'simpler' version of thousand island dressing commonly used in fast food outlets.

Selective recipe notes below have been taken from Barry Popik's blog

"I give up in despair if this recipe which I inclose (sic) does not appear in this corner. I sent the same to you three or four weeks ago and have looked for it in every day's paper, as I read your request for it. To my great surprise a second request came a day or two ago. I try again:

And probably the last appearance of the celebrated variform "dressing." By good rights it should not show itself again this year. I insert it to save a respected member from "despair."

It is a very agreeable sauce, or even a relish, and will do nicely to mix with mayonnaise dressing for the Thousand Island salad dressing, or what ir sometimes called cardinal mayonnaise or Portugaise, etc.

From the number of salad dressings bearing this name one must be named for each island. The dressing is a simple French dressing as above with the addition of chopped onion, celery, peppers with some catsup; in fact, anything may be added and named a Thousand Isle dressing.

We have number of good recipes for salad dressings, use them as a starting point for your own creations: