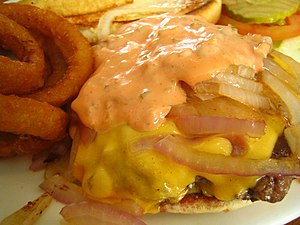 Russian dressing is an American tomato-based salad dressing noted for its pungency. It is typically orange-red, burnt red, or pink in colour.

Russian dressing was invented in the United States in the late 1800s or early 1900s.

During the Cold War, many US restaurants referred to the dressing as "Sweet Tomato Dressing" to show their preference to capitalism over communism.

Some claim that the dressing's name originated in the fact that the condiment in those days typically included caviar, a food associated with Russia.

Selective recipe notes below have been taken from Barry Popik's blog

To make salad dressing in the Russian style take four tablespoonfuls of mayonnaise; add half a pimento, chopped rather finely. To this add half a dozen sprigs of chives, chopped fine, and stir. Take two tablespoonfuls of chili sauce and a dash of tarragon vinegar. Add to this mixture one tablespoonful of whipped cream. Whip again thoroughly and serve. This will be enough for four people.

Mix well together 4 tablespoons of olive oil, 1/2 teaspoon of paprika, 1/2 teaspoon each of salt and dry mustard and 1 tablespoon of chili sauce, then add gradually 1/2 cup of mayonnaise.