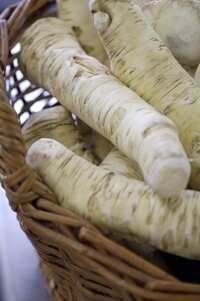 Steirischer Kren is an Austrian horseradish with g.g.A. protection. It is a plant of the family Brassicaceae = Cruciferae (Latin name: Amoracia rusticana), synonymous with ‘Meerrettich’ in German. The cultivated horseradish roots are used as the fresh product, as are the slender lateral roots in some cases (especially in processing). It has a typical appearance characterised by smooth, even main roots with only slightly bent heads and a small number of fine roots. The average overall length of the main roots is 25 to 30 cm (although it is also sold cut into pieces) and their diameter is approximately 3 cm. It is mainly valued for its pungent, fiery taste, which is often highlighted in various tasting sessions and descriptions. It is also characterised by robust growth and the fact that it does not tend towards bitterness.

Steirischer Kren is either preserved — freshly grated — as part of a natural, gentle process which makes it comparable with freshly grated horseradish in terms of appearance and taste, or it is grated and additives are added to improve consistency (creaminess) and preservation qualities. In both cases, it is offered in different types of container (tubes, tins, jars, etc.). Exclusive use of ‘Steirischer Kren’ guarantees the high level of pungency and fieriness. In addition to the main horseradish roots, the slender lateral roots are also used in processing.

Steirischer Kren is traditionally grown in southern Styria, in the districts of Radkersburg, Feldbach, Leibnitz, Deutschlandsberg, Voitsberg, Graz and surrounding area, Weiz, Hartberg and Fürstenfeld (along a line Hartberg-Weiz-Graz-Voitsberg). This region is delimited by the Wechselbundesstraße (currently called the B 54) and the Packerbundesstraße (currently called the B 70).

The Illyrian climate in southern Styria is characterised by high air humidity, relatively high precipitation and high temperatures in the growing season. The average annual temperature is 9.5°C; average annual precipitation is 880 mm. The medium-heavy soils (brown earth and a high proportion of clay) in the horseradish-growing region have good drainage and thus create ideal growing conditions. Vegetative reproduction over decades (root-cutting selection) has interacted with these influences in southern Styria to produce ‘Steirischer Kren’ with its excellent taste properties and characteristic appearance — the latter alone enabling experts to distinguish it from horseradish roots of different origin. Consumers prize and specifically ask for it mainly because of its pungent fiery taste.

The good reputation of Steirischer Kren has been well known for as long as approximately 140 years. Farm cultivation of horseradish in Styria developed from 1940 onwards, beginning in the district of Radkersburg. Since 1967, contractual cultivation has been organised by the Styrian Vegetable Growers' Association. This has been instrumental in developing Steirischer Kren for export also. For over 40 years, it has also been preserved in economically significant quantities. Styrian farmers have also played a key role in the development of cultivation and harvest methods in this agricultural sector. In 1976, for example, a method was patented for packing horseradish roots. A special uprooter was also developed in Styria for harvesting horseradish, and a Styrian company was even awarded the ‘Fast Forward Award’ — Styria's greatest technology prize — for its method of preserving freshly grated horseradish. Numerous media reports confirm both the popularity of ‘Steirischer Kren’ and the economic importance of horseradish cultivation and horseradish processing for the region. Unprocessed horseradish is traditionally prized in the Styrian horseradish-growing region mainly as an accompaniment to various pub snacks.

In spring, the root cuttings (selected lateral roots) are planted in the prepared field in rows 70 cm apart. This work is done using planting machines which plant the horseradish root cuttings almost horizontally, 10 to 15 cm apart (in other producing countries, the root cuttings are also planted vertically). To prevent the formation of unwanted multiple-head roots, from June onwards the root-cutting heads are exposed and all lateral shoots broken off to leave only the strongest shoot. Later on, the roots are again exposed and the lateral shoots and roots broken or cut off to leave just the lowest root crown. In wet years this work is repeated after about one month. This is still the case today, involving laborious work by hand. These steps make it possible to harvest smooth, even roots with slightly bent heads in late autumn (November) or early spring (February/March). This produces the typical appearance of Steirischer Kren.

Processing takes place using both the main horseradish roots and the thinner lateral roots, but in all cases using only (100 %) selected, inspected and hand-picked raw material from the specified production region. Raw material which is not processed straight away can be stored in chill rooms at 2°C. Gentle processes are used to clean, wash and sort by hand the horseradish roots in order to eliminate those with poor qualities. The horseradish roots are then freshly grated and either enriched using additives which improve consistency and preservability (vinegar, oil, citric acid, sulphur), thereby enabling the ‘Steirischer Kren’ to retain its special aroma and pungency — or the freshly grated horseradish is preserved using a natural, gentle process (addition of E 223, preservative), making it comparable for a few months with freshly grated horseradish. Finally, the sterile filling of jars, tubes or tubs takes place.