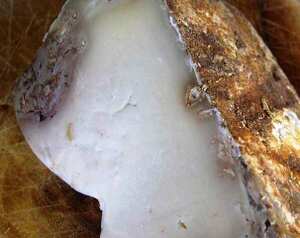 Salva Cremasco DOP is a soft, table cheese made exclusively from raw, whole cows' milk. It has a minimum maturing period of 75 days, during which time its rind is periodically washed. When released for consumption, the cheese has the following characteristics:

The flavour of Salva Cremasco cheese is closely linked to the maturing process; it is not very salty and it has a slightly bitter taste reminiscent of green grass, in particular near the rind. The chemical characteristics of the cheese when released for consumption are as follows:

The intense, clear-cut but nevertheless delicate aroma is mainly reminiscent of citrus fruit and melted butter, with a hint of sour milk. The flavour is more intense than the aroma. Owing to its high level of acidity, when it is pressed between the fingers it is not springy but rather crumbly and even slightly floury.

Not less than 50 % of the cows' diet must be composed of feeding stuffs grown on the holding or within the Salva Cremasco production area.

At least 60 % of the dry matter in the fodder in the daily ration must come from feed produced in the defined geographical area. The permitted types of fodder include green fodder and/or green fodder from stable or artificial meadows, fodder crops, hay, straw and grass silage. The suitable fodder crops are grasses from stable mixed meadows, lucerne meadows and clover meadows; single- or mixed-grass meadows made up of ryegrass, rye, oats, barley, fodder maize, wheat, sorghum regrowth, maize, foxtail millet, cock's-foot, fescue, Timothy-grass, sainfoin, pea, vetch and minor-variety broad bean.

Vegetable fats with an iodine value not exceeding 70 and fatty acids (either in the natural state or salified) from vegetable oils are permitted. Fish oils are permitted in ‘additives’ and ‘premixes’. It is permitted to add the mineral salts authorised by the legislation in force and the additives such as vitamins, trace elements, amino acids, flavourings and antioxidants authorised by the legislation in force, with the added requirement that any antioxidants and flavourings used must be natural or nature-identical.

Salva Cremasco must be portioned and thus packaged in the defined geographical area in order to ensure that consumers receive a high-quality, authentic product. It is important that the cheese be portioned and packaged in suitable premises that are adjacent to the maturing premises, using appropriate paper for food use and taking care to ensure that it adheres well to the cut part, so as to prevent initial moisture, preserve the integrity of the thin rind and avoid the development of non-indigenous micro-organisms. In addition, restrictions regarding packaging are necessary because the identifying mark is stamped on only one of the flat sides of the product. Accordingly, once portioned, the product could easily be confused with a similar product, thereby compromising the correct identification of individual portions of the cheese, which would be lacking any sign of the origin mark. This would certainly make it more difficult to ensure the traceability of the product.

The production area of Salva Cremasco DOP covers the entire area of the provinces of Bergamo, Brescia, Cremona, Lecco, Lodi and Milan.

The factors that demonstrate the specificity of the geographical area of origin are largely linked to producers' know-how and long-standing cheese-making tradition, the particular salting conditions adopted and the maturing technique; also important are the geographical conditions of the area that have always facilitated the significant development of animal husbandry and milk production.

The area where Salva Cremasco is produced covers part of the Po Valley where, if only sometimes as a centre of winter transhumance, Italian milk and cheese production have been concentrated since the Middle Ages. Agriculturally speaking, the land is given over to cereal growing, specialised intensive crop growing and large-scale fodder production, made possible by the historic drainage and canalisation work. Natural factors have thus always made it possible to optimise the activity of rearing the local cattle breeds. These breeds produce milk that is very well suited to cheese making owing to the animals' diet of fodder supplemented by feedingstuffs.

The maturing premises are another important environmental factor. Maturing takes place in premises that are particularly rich in ambient mould varieties, which become part of the microbiological make up of Salva Cremasco. The specific nature of these surroundings derives from the fact that, as each cheese is produced, it is placed in the maturing premises. This makes it possible for the fresher cheese to be ‘contaminated’ by the more mature ones, which transmit to them the mould that has naturally developed during the maturing process and which thus also become characteristic of the premises themselves. The ecosystem that determines the aforementioned environmental characteristics of the premises is not transferrable and the mould varieties are an indispensable part thereof, as they help to create the intrinsic characteristics of the product.

Great importance must be attributed to the production tradition of cheese-makers who, over the centuries and through the experience handed down from generation to generation, have developed and refined their cheese-making techniques. In their cheese-making activity, they have the know-how to best manage the delicate stages of production and they still use traditional materials, such as wood, which are stipulated to this day in the maturing stage. This material makes it possible for the cheese to breath and release the excess whey, thereby allowing the cheese to mature normally and ripen slowly.

Moreover, the producers' experience and skill are essential for monitoring and assessing that maturing is proceeding correctly and to ensure that the characteristic rind forms. Indeed, during the maturing period producers have to sponge and brush the rind of each individual cheese. Brushing is particularly important and is carried out carefully using water and salt or food oil, marc and herbs. These abilities, which have been handed down from generation to generation, are reflected in the producers' manual skill which has developed in a manner reflecting the long-standing production tradition of the cheese. It is appropriate here to point out that some the cheeses were depicted in some 17th and 18th century frescoes.

In the Salva Cremasco geographical production area, dairies are in operation that have special premises characterised by ambient mould varieties that contribute to the microbiological make up of it. The surroundings in which the cheese matures are among the factors necessary for the development of its taste, colour and appearance characteristics. The maturing premises are characterised by a natural microflora that has been present for many years and that contributes to the formation of a thin rind, which in turn acts as a locus where many indigenous microbes can establish themselves. These microbes become an integral part of Salva Cremasco and ensure that maturing proceeds properly and that the quality characteristics described above are achieved.

The sizes and associated weight formats not only constitute a distinguishing characteristic in themselves, but are also reflect and testify to adherence to the age-old methods for production, which involved the use of rectangular moulds for the curd.

Another important factor that should be stressed is the human input in the production of the cheese, in particular during the salting and maturing stages. Salting is a critical operation on which the successful production of Salva Cremasco largely depends, as it is a cheese that matures from the outside in, with maturing being linked to a correct balance between the diffusion of the salt and the development of the surface microflora. This requires great skill and experience on the part of the cheese-maker, as do the sponging and brushing stages which take place during maturing and, through visual and tactile checks on the cheeses, make it possible to keep the surface of the cheeses springy and contain the development of fungal hyphae so as to avoid a situation whereby their excessive growth has a detrimental effect on the characteristics of the rind and the maturing process itself.

Lastly, it is interesting to recall that, through the very meaning of the name, Salva Cremasco production is intimately linked to the past behaviour of the local population. The etymology of the name can be traced back to the formerly widespread practice in the production area of using the milk that was surplus to requirements, saving (‘salvare’) the excess by producing Salva Cremasco.

If the Salva cheese is not listed below, select a similar type of cheese from the list below to get a rough idea for the number of calories in Salva cheese.