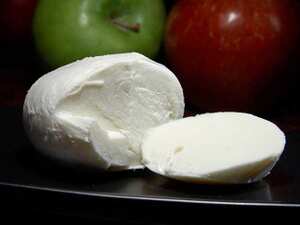 Mozzarella is a generic term for several kinds of originally Italian cheeses that are made using spinning and then cutting (hence the name; the Italian verb mozzare means "to cut"):

Fresh mozzarella is generally white, but may vary seasonally to slightly yellow depending on the animal's diet. It is a semi soft cheese. Due to its high moisture content, it is traditionally served the day it is made, but can be kept in brine for up to a week, or longer when sold in vacuum-sealed packages. Low moisture mozzarella can keep refrigerated for up to a month, though some pre shredded low moisture mozzarella is sold with a shelf life of up to 6 months. Mozzarella of several kinds are also used for most types of pizza, lasagna, or served with sliced tomatoes and basil in Insalata caprese.