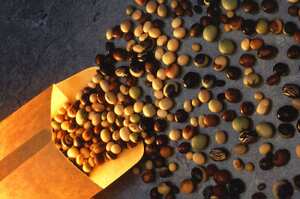 The soybean (U.S.) or soya bean (UK) (Glycine max) is a species of legume native to East Asia. It is an annual plant that has been used in China for 5,000 years as a food and a component of drugs. Soy contains significant amounts of all the essential amino acids for humans, and so is a good source of protein. Soybeans are the primary ingredient in many processed foods, including dairy product substitutes.

Soybeans can be broadly classified as "vegetable" (garden) or field (oil) types. Vegetable types cook more easily, have a mild nutty flavour, better texture, are larger in size, higher in protein, and lower in oil than field types. Tofu and soymilk producers prefer the higher protein cultivars bred from vegetable soybeans originally brought to the United States in the late 1930s. The "garden" cultivars are generally not suitable for mechanical combine harvesting because they have a tendency for the pods to shatter on reaching maturity.

Immature soybeans may be boiled whole in their green pod and served with salt, under the Japanese name edamame.

In China, Japan, and Korea the beans and products made from the bean are a popular part of the diet. The Chinese invented tofu and also made use of several varieties of soybean paste as seasonings. Japanese foods made from soya include miso, natto, kinako and edamame. In Korean cuisine, soybean sprouts, called kongnamul are also used in a variety of dishes such as doenjang, cheonggukjang and ganjang.

How much does one cup of soybeans weigh?

How to cook soya beans in a pressure cooker