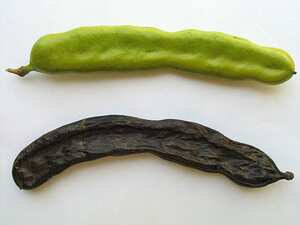 The Carob tree, Ceratonia siliqua, is a leguminous evergreen shrub or tree of the family Leguminosae (pea family) native to the Mediterranean region. It is cultivated for its edible seed pods. Carobs are also known as St. John's bread. According to tradition of some Christians, St. John the Baptist subsisted on them in the wilderness.

Carob was eaten in Ancient Egypt. It was also a common sweetener and was used in the hieroglyph for "sweet" (nedjem). Dried carob fruit is traditionally eaten on the Jewish holiday of Tu Bishvat. Carob juice drinks are traditionally drunk during the Islamic month of Ramadan.

Carob pods were an important source of sugar before sugarcane and sugar beets became widely available.

Carob powder and carob chips are used as an ingredient in cakes and cookies. Carob is sometimes used as a substitute for chocolate, however the flavour is significantly different. The seeds, also known as locust beans, are used as animal feed. They are also the source of locust bean gum, a thickening agent used in numerous processed foods. In Egypt, carobs are consumed as a snack. Crushed pods are used to make a refreshing drink. Compotes and liqueurs are made from carob in Portugal, Spain and Sicily. Carob has proven effective in relieving diarrhea in infants.

Carob has also been used as a non-toxic alternative to chocolate in dog treats. The theobromine in chocolate is toxic to most dogs.