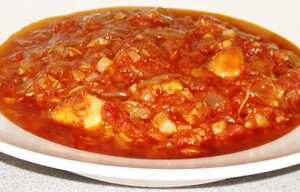 Pisto is the name of a Spanish dish typical from the Region of Murcia and La Mancha. It is usually made of tomatoes, onions, aubergines (eggplant), courgettes, sweet peppers and olive oil. It is similar to ratatouille and is usually served warm to accompany a dish or with a fried egg and bread. It is also used as the filling for empanadillas and empanadas.

The dish is sometimes formally named Pisto manchego, from its origin in La Mancha. Pisto a la Bilbaína, from Bilbao in the Basque Country, usually has just courgettes and green peppers in a tomato sauce, sometimes with eggs.

Other uses of "Pisto"