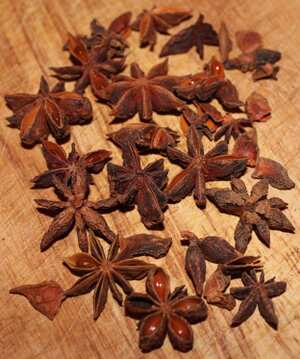 Star anise contains anethole, the same ingredient which gives the unrelated anise its flavour. Recently, star anise has come into use in the West as a less expensive substitute for anise in baking as well as in liquor production, most distinctively in the production of the liqueur Galliano. It is also used in the production of Sambuca, pastis, and many types of absinthe.

Star anise is the primary industrial source for shikimic acid, used to create the anti flu drug Tamiflu. Tamiflu is regarded as the most promising drug to mitigate the severity of bird flu (H5N1); however, reports indicate that some forms of the virus have already adapted to Tamiflu.