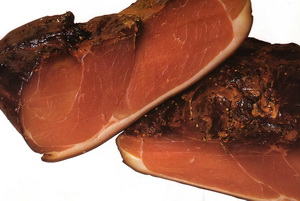 Jambon d'Ardenne is an IGP/BGA Belgian ham obtained from a pig's hind leg, by dry salting, rubbing with salt or immersion in salt water, maturing in cold storage, smoking being optional but using wood or sawdust to the exclusion of wood and sawdust from coniferous trees and recycled wood, with the minimum production time depending on the type of product.

The ham must be produced in the Belgian Province of Luxembourg or in certain districts bordering on the Provinces of Liège and Namur. The natural factors are fundamental in the case of Jambon d'Ardenne. It has been observed that the maturing and drying of the green hams are linked to the conditions of the microclimate of the Ardennes. They give the dry ham its highly typical characteristics. The seasonal phenomena of temperature, humidity and circulation of fresh, humid air are conditions for harmonious maturing and drying. The human factors represent the tradition component. They are defined as conditions of production which are linked to local, fair and constant customs. The designation of origin invokes biological phenomena which we cannot control. The methods of producing the ham have been adapted to these natural conditions over time to make the very specific product, Jambon d'Ardenne.

In the old days in the Ardennes, pigs provided the only source of meat for consumption, usually in cured form. Ham has always been thought to be the choicest part, and that of the Ardennes has always been associated with festivities there. Ham was served to travellers all over the Ardennes, to the extent that narrators at the beginning of the 19th century ended up complaining about it, as shown by their books. Public or private collections of menus would almost always mention Jambon d'Ardenne. In the Ardennes, this custom, which is still very much alive today, was the rule.

Surveys conducted in recent years confirm that a well assured reputation continues. This reputation naturally led to fraud by producers from outside the Ardennes. Enthusiasts, as well as the manufacturers, called for regulations to ensure the quality, prevent imitations and avoid the designation falling into the public domain. The specific nature of Jambon d’Ardenne was recognised by Belgian legislation: Royal Decree of 4.2.1974. This made the production methods used in the Ardennes into a legal requirement and defined the territory in which production could be carried out. The ham must be salted, matured and smoked in the Ardennes.