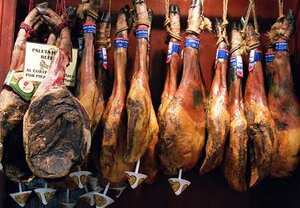 Presunto de Campo Maior e Elvas and Paleta de Campo Maior e Elvas are Portuguese IGP hams. Presuntos and paletas produced from legs and shoulders respectively of pigs (other than breeding animals) of the Alentejana breed entered in the Portuguese herd book in the Alentejana breed Section, reared in a specified manner and slaughtered when they are 12 to 24 months old. The salting, post-salting, drying/curing, ageing, cutting and packing are governed by well-defined rules.

The geographical area in which processing (production, cutting, slicing and packaging) takes place is set naturally, being limited to the municipalities of Campo Maior and Elvas, since the latter feature a microclimate that differs substantially from the conditions obtaining in the rest of the Alentejo, in that it is more continental (very hot and dry summers and very cold and dry winters), inevitably leading to significant differences in the way the meat is prepared, salted, aged and cured, differences which themselves bring about appreciable changes in organoleptic characteristics of the finished product. The presuntos and paletas have a thinner and more elongated cross-section, are darker and, when cut, have a less tender and succulent texture, a more delicate and slightly salty flavour and a less smooth, bitterer and more lingering aroma.

The pigs, of the Alentejana breed, are reared under extensive and semi-extensive conditions, mostly in the open air, in areas featuring a minimum of 40 holm oak or Hispania oak trees per hectare and a maximum density of one pig per hectare of montado. The animals tend to be reared extensively, feeding on cereal waste and by products, grasses, legumes (e.g. peas and vetches) and even small mammals and birds, eggs, reptiles, molluscs, worms, etc., as is the wont of omnivorous animals. It is only when there is a shortage of food in the field that the animals may be given supplements (up to 30 % of their diet) from outside the region. The animals invariably undergo a finishing phase in which they spend 60 to 90 days under a montanheira system (i.e. feeding on acorns and other montado products), and must replace at least three arrobas (45 kg) of body weight in this way. The pigs are slaughtered at between 12 and 24 months, the minimum weight of each carcase being 90 kg. The legs and shoulders are marked individually by means of a numbered tag. The legs and shoulders must weigh a minimum of 7,5 kg and 5 kg respectively, and the hoof must still be attached. Depending on the weight of the legs and shoulders the subcutaneous fat may be trimmed. The processing of the legs and feet, based on authentic and unvarying local methods derived from the know-how of the local population, comprises the following: cutting, salting, rinsing, post salting (sweating), drying/curing and ageing. It is in the course of this process that the presuntos and paletas slowly acquire the appearance, colour, aroma and texture that make them unique.

Presuntos and Paletas de Campo Maior e Elvas may be marketed whole, in pieces or sliced, with or without bone. The cutting, slicing and boning may be carried out only on premises situated within the geographical area of production, in so far as special know-how is associated with these operations, a know-how which relates to the shape, delicate aromas and complex flavours of each piece. Before a piece is selected for cutting, specialists from the region determine the optimum curing stage, and knowledgeable and trained tasters carry out a detailed organoleptic assessment of the product and its suitability for cutting. In order to maximise the yield from each piece the cutting must be performed by highly trained specialists who, by means of expert cuts, can make use of all the muscle tissue in the piece and produce extremely thin slices that fully exploit the product's organoleptic potential. The fat on the meat — which has its own flavour, aroma, colour and brilliance — deteriorates rapidly when in contact with the air or when the temperature is high. Accordingly, the work described above has to be carried out on premises that are suitable microbiologically and in terms of temperature and moisture, in order not to impair the delicate flavour and enable the product to be packaged promptly, thereby avoiding undue exposure to the air. It should be added that this work is accompanied by organoleptic tests carried out by specially trained personnel, the aim being to ensure that the product is fully traceable and is not impaired, above all organoleptically, that the consumer, far from being misled, is supplied with a product that is genuine and was produced in its region of origin, and that checks can be carried out throughout the production cycle.

Link to the geographical area

Presuntos and paletas de Campo Maior e Elvas are produced in a region where soils are poor and the climate markedly hot and dry in the summer and cold and dry in the winter. The flora that is able to withstand these conditions and which can be exploited is the montado and the vegetation associated with it. The Alentejo pig is the animal that best exploits those natural conditions, since it can be reared in the open and allowed to feed mainly on the natural products associated with that environment (grasses, acorns, cereals and pulses and small animals) under a specific system known as montanheira. This type of animal husbandry and nutrition gives the meat special characteristics in terms of both muscle and fat cover.

The special climatic conditions obtaining in Campo Maior and Elvas led to the development of specific know-how which, since it enables the pigmeat to be dried naturally, without resorting to smoke or any external agent with the exception of salt, results in a number of differences, in particular as regards:

Accordingly, Presuntos and Paletas de Campo Maior e Elvas have a thinner and more elongated cross-section, are darker and, when cut, have a less tender and less succulent texture, a flavour that is less delicate but slightly salty, and an aroma that is less smooth and delicate. Reflecting as they do the conditions obtaining in Elvas and Campo Maior, municipalities that are further inland and more ‘continental’, these products are thinner, more elongated, saltier and darker than the softer ones produced in the plains of the Alentejo.

The relationship between the product and the region is also based on the following:

History: There are numerous references — some dating back several centuries B.C. — to the role and importance of pork products in the local diet. More recently, the last four hundred years or so witnessed a struggle between agriculture and animal husbandry, centred on the ill effects pigfarming has on agricultural land and pigfarming's role in feeding the population. Practically every municipality in the High Alentejo at some time or another asked the king or parliament to protect its interests. In Elvas and Arronches, for instance, there were so many pigs on the city streets that, by order of the king, they were not allowed within the city walls. With, as a result, families prevented from keeping pigs — then a major resource — the king received so many equally vigorous counterpleas that he ordered a return to the previous state of affairs, whereupon those who signed the petitions in some cases began to complain that the lack of pigs meant misery for the poor. Campo Maior did not become part of Portuguese territory until the signing of the Treaty of Alcanises in the 13th century, when King Dinis was on the throne. Elvas, which is said to have been founded by the Romans, was first reconquered from the Moors in 1166 and, in 1229 became part of Portugal. Both Campo Maior and Elvas are frontier locations, where the Spanish influence is particularly marked, something which is reflected in the differences in the way in which Presuntos and Paletas are produced compared with the rest of the Alentejo.

Soil and climate: The sparse oak woodlands and associated vegetation of the montado provide a type of flora which can successfully withstand the harsh conditions found locally, a combination of poor soils and a markedly hot and dry climate. For their part, Campo Maior and Elvas have a specific microclimate featuring very low annual rainfall (617 mm), a very high level of sunshine (2 979 hours) and temperatures that easily reach 33-34 °C in the summer and can fall to 4-5 °C in the winter, which both attests to its continental nature and provides ideal conditions for the drying of Presuntos and Paletas.

Human: A number of traditions are associated with the consumption of these products, which are never presented ready-cooked. In Campo Maior and Elvas it is customary to eat Presuntos or Paletas cut very thinly by hand and accompanied by a good regional wine, in the late afternoon or as an appetiser before a late lunch. In earlier times Presuntos or Paletas de Campo Maior e Elvas tended to be served only on festive occasions or as a gift to honoured guests.