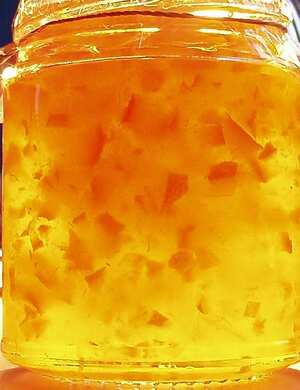 A jar of marmalade

English marmalade is a sweet preserve with a bitter tang made from fruit, sugar, water, zest and (in some commercial brands) a gelling agent. American-style marmalade is sweet, not bitter. In English speaking usage "marmalade" almost always refers to a preserve derived from a citrus fruit, most commonly oranges. The recipe includes sliced or chopped fruit peel, which is simmered in fruit juice and water until soft; indeed marmalade is sometimes described as jam with fruit peel (although many manufacturers now also produce peel-free marmalade). Such marmalade is most often consumed on toasted bread for breakfast. The favoured citrus fruit for marmalade production in the UK is the "Seville orange", Citrus aurantium var. aurantium, thus called because it was originally imported from Seville in Spain; it is higher in pectin than sweet oranges, and therefore gives a good set. Marmalade can also be made from lemons, limes, grapefruits, or a combination thereof.