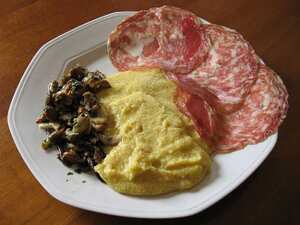 Polenta with sopressa and mushrooms. 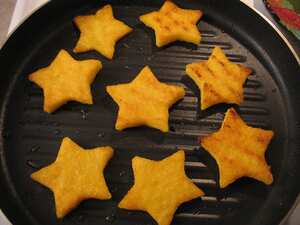 Polenta is made with ground yellow or white cornmeal, (ground maize). It can be ground coarsely or finely depending on the region and the texture desired. As it is known today, polenta derives from earlier forms of grain mush (known as puls or pulmentum in Latin or more commonly as gruel or porridge) commonly eaten in Roman times and after.

Polenta is very similar to corn grits, a common dish in the cuisine of the Southern United States, with the difference that grits are usually made from coarsely ground kernels. When properly cooked, grits and polenta have similarly smooth textures, "grit" referring to the texture of the dried corn before cooking. Another variation uses ground hominy (similar to masa harina), lye-treated corn kernels.

Similarity with other foods

Polenta is very similar to coosh, a dish of boiled cornmeal mush which is also often sliced and fried but which is often eaten with sweet toppings like maple syrup. A common dish in the cuisine of the Southern United States is grits, with the difference that grits are usually made from quickly-cooked coarsely ground kernels or from lye-treated (nixtamalized) kernels (ground hominy).

The Brazilian variety is also known as angu. Originally made by native Indians, it is a kind of polenta without salt nor any kind of oil. However, nowadays "Italian" polenta is much more common at Brazilian tables, especially in the southern and southeastern regions (which have high numbers of Italian immigrants), although some people still call it "angu". The city of São Bernardo do Campo is notable for its restaurants specialized in frango com polenta (fried chicken with fried polenta).

Polenta is also a very traditional meal in Uruguay

In South Africa, cornmeal mush is a staple food called mealie pap; elsewhere in Southern Africa it is called sadza or phutu-(pap). It is similar to polenta but most often it is not as dense as polenta. In Zimbabwe, phaletshe, in Botswana, and nshima, in Zambia, and "Oshifima" or Pap in Namibia. In East Africa a similar dish is called ugali, named from the Swahili language. Fufu, a starch-based food from West and Central Africa, may also be made from maize meal. In the north of Angola it is known as funge, probable source of names for the dish in a number of Caribbean countries, destination of slaves from Angola and elsewhere along the West Coast. In the Caribbean, similar dishes are Pastelle (Trinidad & Tobago), cou-cou (Trinidad & Tobago and Barbados), funchi (Curaçao), funjie (Antigua and Barbuda) and fungi (Virgin Islands). It is known as funche in Puerto Rican cuisine and mayi moulin in Haitian cuisine.