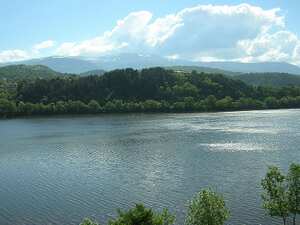 Lake Pancharevo and the Vitosha Mountains

In this category you will find Bulgarian recipes. Bulgarian cuisine is a representative of the cuisine of south-eastern Europe. Essentially South Slavic, it shares characteristics with other Balkans cuisines. Owing to the relatively warm climate and diverse geography affording excellent growth conditions for a variety of vegetables, herbs and fruits, Bulgarian cuisine is diverse. Famous for its rich salads required at every meal, Bulgarian cuisine is also noted for the diversity and quality of dairy products and the variety of Bulgarian wines and local alcoholic drinks such as rakia, mastika and menta. Bulgarian cuisine features also a variety of hot and cold soups, an example of a cold soup being tarator. There are many different Bulgarian pastries as well such as banitsa.

Most Bulgarian dishes are oven baked, steamed, or in the form of stew. Deep-frying is not very typical, but grilling - especially different kinds of meats - is very common. Pork meat is the most common meat in the Bulgarian cuisine. Some explain this with the fact that during the years of being part of the Ottoman Empire, pigs were the only livestock animals that were not subject to the so-called “natural tax” due to religious reasons. The long time as a part of the Ottoman Empire also explains the oriental influence in Bulgarian cuisine with dishes such as moussaka, gyuvetch, and baklava now being considered very traditional. A very popular ingredient in Bulgarian cuisine is the Bulgarian white brine cheese called sirene. It is the main ingredient in many salads, as well as in a variety of pastries. Fish and chicken are widely eaten and while beef is less common as most cattle are bred for milk production rather than meat, veal is a natural bi-product of this process and it is found in many popular recipes. Bulgaria is a net exporter of lamb and its own consumptuion of the meat is prevalent during its production time in spring.

Traditionally Bulgarians have consumed a notable quantity of yoghurt per head and is noted historically for the production of high quality yoghurt, including using a unique variety of micro-organism called Lactobacillus bulgaricus in the manufacturing process. It has even been claimed that yoghurt originates from Bulgaria. Though this cannot be substantiated, Bulgaria has been part of a region that has cultivated and consumed yoghurt from as far back as 3,000 BC.

ZGU/ЗГУ stands for ‘Zashchiteno Geografsko Ukazanie (Защитено Географско Указание)’ which in the UK we know as 'Protected Geographical Indication' (PGI). Under the EU agricultural product quality policy, this "covers agricultural products and foodstuffs closely linked to the geographical area. At least one of the stages of production, processing or preparation takes place in the area." The following Bulgarian ingredients are those which are registered as ZGU/ЗГУ.

Clicking here will expand/collapse the table below, showing ZGU/ЗГУ Ingredients

GTS/ГТС stands for ‘Garantiran Traditsionen Spetsialitet (Гарантиран Традиционен Специалитет)’ which in the UK we know as 'Traditional Speciality Guaranteed' (TSG). Under the EU agricultural product quality policy, it "highlights traditional character, either in the composition or means of production". The following Bulgarian ingredients are those which are registered as GTS/ГТС.

Clicking here will expand/collapse the table below, showing GTS/ГТС Ingredients