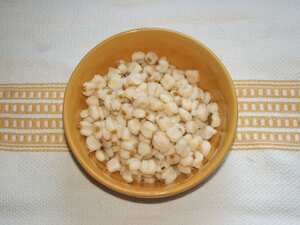 A bowl of hominy

Hominy or nixtamal is dried maize (corn) kernels which have been treated with an alkali.

The traditional U.S. version involves soaking dried corn in lye-water (sodium hydroxide or potassium hydroxide solution), traditionally derived from wood ash, until the hulls are removed. Mexican recipes describe a preparation process consisting primarily of cooking in lime-water (calcium hydroxide). In either case, the process is called nixtamalization, and removes the germ and the hard outer hull from the kernels, making them more palatable, easier to digest, and easier to process.

Commercially available canned hominy may have a slightly stronger scent when compared to the traditional preparation.

The earliest known usage of nixtamalization was in what is present-day Guatemala around 1500 - 1200 BC. It affords several significant nutritional advantages over untreated maize products. It converts some of the niacin (and possibly other B vitamins) into a form more absorbable by the body, improves the availability of the amino acids, and (at least in the lime-treated variant) supplements the calcium content, balancing maize's comparative excess of phosphorus.

Some recipes using hominy include menudo (a spicy tripe and hominy soup), pozole stew (a stew of hominy and pork, chicken, or other meat), hominy bread, hominy chili, casseroles and fried dishes. Hominy can be ground coarsely to make hominy grits, or into a fine mash (dough) to make masa, the dough used to make tamales.

Buying dried hominy in the UK

The Cool Chile Co sell dried hominy as pozole. It's about half-way down on their corn products page.