Ossobuco (Italian for 'holed bone'), in English often spelled osso buco or osso bucco, is a Milanese speciality of veal shanks cooked in meat broth and flavoured with white wine. Slowly braised, this relatively tough, yet flavourful cut of meat becomes meltingly tender, and the connective tissues and marrow dissolve into the sauce, making it rich and creamy. 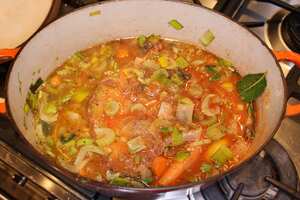 The shank is a relatively cheap cut of veal which is readily available in most good supermarkets and butcher shops. Look for meaty hind-shanks cut from the top of the thigh with a high proportion of meat-to-bone; each piece should be about 5" across and 1" to 1½" thick.

Traditionally, ossobuco is made without tomatoes (these being unknown in Milan until the late 19th century). However, the traditional version, prepared with cinnamon, allspice, bay leaf and gremolata called in bianco, has by and large been replaced with the newer version which includes tomatoes and the 'holy trinity' of Italian cooking: carrot, celery and onion, flavoured with a bouquet garni and without gremolata (although 'hybrid' versions exist which include both tomato and gremolata). It should be noted that while the traditional combination with risotto alla milanese is perfect for the former version (for which is was intended), the modern-day version with tomato, which is both moister and bolder in flavour and does not combine well with saffron, is better served with polenta. The following recipe is for a 'modern' version.

This was a complete success, though a few notes are in order:

As always, the recipe was made with what we had 'in stock'.