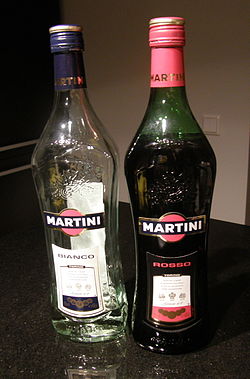 Vermouth is a fortified wine flavoured with aromatic herbs and spices ("aromatised" in the trade) using closely-guarded recipes. Some vermouth is sweetened; however, unsweetened, or dry, vermouth tends to be bitter. The person credited with the first vermouth recipe, Antonio Benedetto Carpano from Turin, Italy, chose to name his concoction "vermouth" in 1786 because he was inspired by a German wine flavoured with wormwood, a herb most famously used in distilling absinthe. The modern German word Wermut means both wormwood and vermouth. The herbs were originally used to mask raw flavours of cheaper wines, imparting a slightly medicinal "tonic" flavour.

Historically, there have been two main types of vermouth, sweet and dry. Recently, however, vermouth manufacturers have began experimenting and have created various styles, including white or bianco, amber, and rose. Vermouth is produced by starting with a base of a neutral grape wine. Each manufacturer adds additional alcohol and a proprietary mixture of dry ingredients, consisting of aromatic herbs, roots, and barks, to the base wine. After the wine is aromatised and fortified, the vermouth is sweetened with either cane sugar or caramel, depending on the style. Italian and French companies produce most of the vermouth consumed throughout the world.

Martini is a brand of Italian vermouth, named after the Martini & Rossi Distilleria Nazionale di Spirito di Vino, in Turin.

Cinzano vermouths date back to 1757 and the Turin herbal shop of two brothers, Giovanni Giacomo and Carlo Stefano Cinzano, who created a new "vermouth rosso" (red vermouth) using "aromatic plants from the Italian Alps in a [still-secret] recipe combining 35 ingredients (including marjoram, thyme and a species of Achillea called musk yarrow)".

Cinzano Bianco followed, based on a different combination of herbs that included artemisia (wormwood), cinnamon, cloves, citrus and gentian; it was followed by an Extra Dry version.