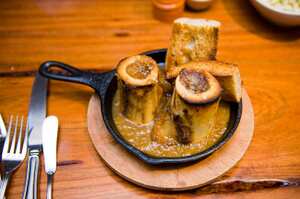 Many cultures such utilise bone marrow as a food. The Vietnamese prize bone as the soup base for their national staple Pho'; Alaskan Natives eat the bone marrow of caribou and moose; Indians use slow-cooked marrow as the core ingredient of the Indian dish Nalli Nihari; Mexicans use beef bone marrow from leg bones, called tuetano, which is cooked and served as filling for tacos or tostadas; it is also considered to be the highlight of the Italian dish osso buco (braised veal shanks). Though once used in various preparations, including pemmican, bone marrow for human consumption in the United States has recently fallen out of favour as a food.