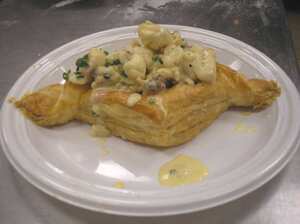 Lobster Wenberg to Newberg - The story and the recipe

During the Gilded Age of the 1870's, Ben Wenberg was a successful, wealthy sea captain who operated in the fruit trade between New York and Cuba. During his stays in New York, Wenberg frequented Delmonico's Restaurant at the 14th Street and later at the 26th Street locations, where Charles Delmonico was manager.

One evening in 1876, Wenberg told Charles about his discovery of a new way to cook lobster. Charles was intrigued and ordered that the following ingredients be brought from the kitchen to Wenberg's table:

With the assistance of Delmonico's staff, Wenberg prepared the lobster dish. Wenberg detached the lobster tail, sliced it into thin, flat pieces, and arranged them in a single layer on a hot chafing dish, with clarified butter. The lobster was sautéed briefly, and then some cream, a little cognac and sherry were added. The mixture was allowed to simmer slowly for a few minutes. Then the secret ingredient was added, and the lobster was served. Charles Delmonico, perhaps with Lorenzo and probably with several patrons, sampled the dish and agreed that it was delicious.

Ranhofer studied the recipe and added his refined touch. The dish was added to the menu as Lobster a la Wenberg. It quickly became popular and much in demand, especially by the after theatre clientele.

Some months after Wenberg shared his discovery with Charles, the two men fought or argued over an as yet, undiscovered and probably trivial matter. The upshot was that Charles banished Wenberg from Delmonico's and ordered Lobster a la Wenberg struck from the menu.

Patrons, however, continued to demand the dish, so Charles hit upon a devilishly clever solution. Charles simply reversed the letters W and N in Wenberg's name, so that WEN became NEW, and the dish forever became Lobster a la Newberg.

As noted above, Ranhofer altered the original recipe to add his own touch. In his book, The Epicurean, Ranhofer gives the following recipe for Lobster a la Newberg (which was also called Lobster Delmonico).

Cook six lobsters each weighing about two pounds in boiling salted water for twenty five minutes. Twelve pounds of live lobster when cooked yields from two to two and a half pounds of meat with three to four ounces of coral. When cold detach the bodies from the tails and cut the latter into slices, put them into a sautoir, each piece lying flat, and add hot clarified butter; season with salt and fry lightly on both sides without colouring; moisten to their height with good raw cream; reduce quickly to half; and then add two or three spoonfuls of Madeira wine; boil the liquid once more only, then remove and thicken with a thickening of egg yolks and raw cream. Cook without boiling, incorporating a little cayenne and butter; then arrange the pieces in a vegetable dish and pour the sauce over. Ranhofer.

This story of how Lobster a la Wenberg became Lobster a la Newberg is one of the many stories that originated at Delmonico's Restaurant.