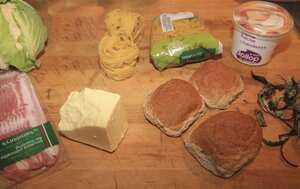 Cauliflower and macaroni cheese, the ingredients

I saw Jamie Oliver make this recently on Jamie's 30 minute meals, though it seems te program was first shown on Channel 4 way back in 2010. We regularly have variations of a similar recipe but using broccoli instead of cauliflower. I thought it would be fun to try it 'Jamies way'. I really liked the idea of the topping he used with the slices of pancetta and breadcrumbs.

I won't be attempting to do the whole meal in 30 minutes - just preheating the oven breaks that one!

You will need a food processor with a grating attachment and a metal blade for this recipe.

I must say, the great tip taken from this recipe was to cook the cauliflower in quarters (leaves 'n all) with the pasta and just mash it when you assemble the dish. Genius, thanks Jamie!

Serve with a green salad.

Use bacon instead of pancetta, though you will probably need to increase the cooking time because it's quite a bit thicker than pancetta and we want it to be crispy for this dish.

I've increased the original 400 ml of liquid to 420 ml as I found it a little on the dry side. I would also lay a sheet of tin-foil over the breadcrumbs on the final bake as ours burnt a little.