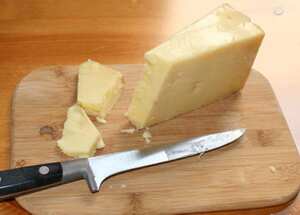 Cheddar cheese is a fairly hard, pale yellow to orange, sharp tasting cheese originating from the English village of Cheddar, in Somerset. Although Cheddar cheese is originally English, it is also widely produced in other countries, including Ireland, the USA, Australia, New Zealand, South Africa and Canada.

In England, Cheddar tends to have a sharp, pungent flavour, often slightly earthy. Its texture is firm, with farmhouse traditional cheddar being slightly crumbly. It is always a pale yellow colour, and food colourings are not used. In parts of the United States and Canada, annatto, extracted from the tropical achiote tree, is used to give Cheddar cheese a deep orange colour. The origins of this practice have been long since forgotten, but the three leading theories appear to be:

Make your own Cheddar cheese

If the Cheddar cheese is not listed below, select a similar type of cheese from the list below to get a rough idea for the number of calories in Cheddar cheese.