Use your consumer power to help improve pig welfare

Many of the 160 million pigs bred for meat across Europe live in conditions that we believe are unacceptable. Pigs face a range of welfare issues that most people are just not aware of.

As consumers we all have the power to make a difference for pigs, and that’s why we’ve launched the RSPCA Think Pig campaign. If you’re partial to a bacon butty, bangers and mash or a pork roast on a Sunday, then we’re urging you to ‘Think Pig’ when out shopping and make sure what you put in your shopping basket is a vote for better pig welfare. 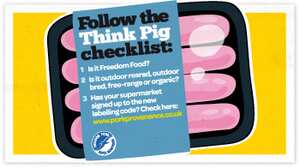 The Think Pig Checklist is a simple way to help you buy sausages, bacon, ham and pork from higher welfare farms.

Supermarkets that have signed up as at June 2010: Adsa, The Co-operative, M&S, Morrisons, Sainsbury's, Tesco, Waitrose.

If you can’t see any of these, then at least check if the food label shows that it has come from a British farm. Welfare standards in Britain are generally higher than other countries.

Follow the RSPCA Think Pig Checklist to make sure that your bacon butty, bangers and mash, gammon,pork roast or ham sandwich has come from pigs that have been reared to higher welfare standards.