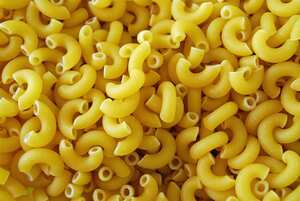 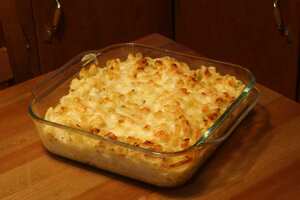 Macaroni is a kind of moderately extended, machine-made dry pasta. Much shorter than spaghetti, and hollow, macaroni does not contain eggs. Though home machines exist that can make macaroni noodles, macaroni is usually commercially made.

In English speaking countries, the name macaroni is customarily given to a specific shape of pasta (i.e. small pasta tubes cut into short pieces). In the United States macaroni is also sometimes labeled as elbow macaroni, or more simply elbows, due to the slight bend in the shape of the pasta noodle. In the U.S. and the United Kingdom, this pasta is often prepared by baking it with a sauce made from cheddar cheese; the resulting dish is called macaroni and cheese (often shortened to macaroni cheese in Britain, and "Mac'n'cheese" in the U.S.

How much does one cup of macaroni weigh?