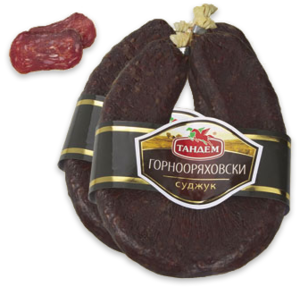 Gornooryahovski Sudzhuk is a compacted, non-perishable, raw, dried sausage manufactured from natural gut filled with machine-minced beef. It is intended for direct consumption.

On the outside it has a clean, smooth membrane, free of blemishes, defects or undue roughness. The membrane adheres tightly to the filling, is free of fatty condensate and has no cavities underneath it. The surface is evenly coated with a dry, white, powdery sausage mould which does not penetrate into the interior. The sausage is cylindrical, flattened and bent into a horseshoe shape. Its ends are tied off and bound together with string. It is 35-40 cm in length and up to 40 mm in diameter. It is solid, elastic and has the same consistency at the periphery as it does at the core. It has an elliptical cross-section with an even, fine-grained texture on its surface. The meat filling is free of cavities, sinews or fasciae. The filling is marbled, its colour varying from red to dark brown as is typical for beef. The fat is white in colour. There is no dark-coloured peripheral ring or grey discolouration in the interior of the cross-section. The flavour is distinctive, pleasant, spicy, moderately salty and free from any extraneous taste. The aroma is distinctive, with vivid tones reflecting its specific mixture of herbal seasoning (black pepper, cumin and savory).

- water content does not exceed 45 % of the overall mass;

- kitchen salt does not exceed 4,5 % of the overall mass;

Fresh beef from healthy, well-fed animals aged 18 months at the time of slaughter.

There are no specific requirements for fodder quality or restrictions on the origin of the fodder.

Specific steps in production that must take place in the defined geographical area:

Primary processing of the main raw material: the meat used to produce Gornooryahovski Sudzhuk sausages must not be above - 5 °C. The meat is cut into pieces weighing 100-150 g each. It is then machine-minced through a kidney-shaped grating, while at the same time the sinews are removed so as not to exceed 10 % connective tissue.

Filling and shaping the sausages: the natural gut is rinsed in running drinking water to remove salt. It is then soaked in water until its elasticity is restored. The filling is stuffed into the gut under pressure.

Immediately after filling, the gut is twisted along its axis at 45 cm intervals. It is then cut at each twist with the help of a knife. The sections thus obtained are shaped manually: the ends are firmly tied off and then tied together with string. Excess filling is removed from the cut ends of the gut. The sausages are hung by their string loops one after the other from wooden bars arranged on trolleys.

Maturing: takes place in drying rooms, where the sausages are hung from bars arranged on racks at 22- 25 °C and 100 to 85 % air humidity for approximately 48 hours and with uninterrupted ventilation, until the meat filling firms up and turns red.

Drying: drying takes place in drying rooms, where the sausages are hung from wooden bars arranged on racks at 15-18 °C and 85 to 70 % air humidity for 10 to 20 days with uninterrupted ventilation.

The sausages are compacted once or twice with metal presses arranged on wooden boards. During the drying process, the surface of the sausages acquires an even coating of white sausage mould which grows naturally in the room.

Gornooryahovski Sudzhuk sausages are marketed in one piece, either unpackaged or in individual vacuum packs.

The geographical location where Gornooryahovski Sudzhuk sausages are manufactured is defined administratively: the town of Gorna Oryahovitsa.

The geographical location is a lowland hilly area 199 m above sea level. The area has a moderate continental climate with a mean annual air humidity of 71 % and a mean annual temperature of + 11,5 °C. The average wind speed is 2,2 m/s, with prevailing north-easterly and north-westerly winds. These climatic conditions favour a characteristic combination of the mould species Penicillium and Aspergillus in specific proportions. This combination of moulds covers the membrane of Gornooryahovski Sudzhuk sausages as a dry, white, powdery coating.

The specific organoleptic qualities are as follows: the taste, aroma, colour and consistency result from the quality of the meat used, the experience of the local population and the specific preparation method (maturing at a high temperature and drying in conditions which allow the growth of microflora characteristic of the geographical environment), which have been handed down over the ages from generation to generation.

Gornooryahovski Sudzhuk sausages are manufactured only from fresh beef with a high glycogen content before breakdown, which makes the sausages juicy and lends them their characteristic taste and red-brown colour. The meat is selected and processed so as to contain 10 % connective tissue and up to 30 % fats in order to give the end product its distinctive tender structure and its specific fine- grained cross-section surface.

The spicy taste of Gornooryahovski Sudzhuk sausages results from a traditional mixture of black pepper, cumin and savory, based on a recipe that has remained unchanged over the ages.

The practical skills of the master manufacturers are particularly important to ensure the good external appearance of the product, its distinctive horseshoe shape and its firmness. The elasticity of the gut is skilfully determined by the technician according to its degree of turgidity and the increase in its volume. After filling, the sausages are shaped by hand by twisting the gut and firming up the filling by tightening the string.

The maturing process is of particular importance in lending the sausages their distinctive qualities. As the sausages mature, their filling becomes more tender and juicy and they acquire their distinctive firmness, taste and colour. The added saltpetre is turned consecutively into nitrites, nitrous acid and nitrogen oxide under the influence of denitrifying micro-organisms naturally propagating under the manufacturing conditions characteristic of the region (a temperature of 22 to 25 °C) and the accumulated lactic acid from the anaerobic breakdown of the glycogen under the influence of the meat enzymes. The nitrogen oxide reacts with the myoglobin from the muscle tissue and with the haemoglobin from the blood, forming nitrosomyoglobin, and respectively nitrosohaemoglobin, which give the mature meat its distinctive red colour. Transformation of the colour of the product to red- brown, the swelling and firming of the meat filling and a specific odour indicate that the anaerobic processes must be discontinued. The skill of the master manufacturers is crucial in assessing when the process must be stopped to prevent the formation of substances which would make the sausages unfit for consumption. In the past, the authentic maturing method was achieved by placing the sausages in a heap and covering them with rugs, which increased their temperature. Since the technology has been modernised, the same effect, resulting from the physical and chemical changes in the product, is achieved by heating the air and ensuring uninterrupted ventilation in order to reduce the humidity in the room to 85 %.

Under relatively constant drying conditions in the room (a temperature of 15-18 °C and air humidity of approximately 75 %), the regionâs characteristic mould develops, which prevents the fats from going rancid and a grey ring from forming. It contributes to the even drying of the product and enhances the aroma of the seasoning. When the individual sausages are compacted the skill of the master manufacturers becomes of particular importance. They must tighten the press gradually and distribute pressure evenly so as to prevent the gut from splitting while giving the sausages their typical horseshoe shape, elliptical cross-section and uniform thickness. The sausages catch the mould from the wooden boards during the pressing process.

The spores are spread around the room by means of the gentle air currents and their mycelium evenly coats the entire surface of the sausages. The characteristic climatic conditions in the area of manufacture (dry, cold winds and gentle air currents) during the period from September to May and the specific microflora are preconditions for the establishment of appropriate drying conditions in the manufacture of Gornooryahovski Sudzhuk sausages. In the past, the sausages were arranged on long wooden sticks hung underneath the eaves on the northern side of the workshops. Today, the same climatic conditions are achieved throughout the year by using ventilation systems which regulate and maintain constant temperature and air humidity.

The maturing and drying rooms are equipped with a device to record the air temperature and humidity, which allows continuous control over the manufacturing conditions to achieve a water content of 45 % of the total mass.

The emergence and subsequent growth in the production of Gornooryahovski Sudzhuk sausages was the result of the relatively constant climatic conditions and the gentle air currents in the area of Gorna Oryahovitsa and the propagation of a specific combination of moulds (Penicillium and Aspergillus) across the surface of the sausages, combined with an entrepreneurial spirit that led the locals to preserve meat by salting and maturing at high temperatures and subsequent drying.

The recipe has been handed down from father to son in many families, and the manufacture of sausages was their main source of income. In order to exercise their trade, the manufacturers were required to have a masterâs certificate and a special permit.

This PGI application stems primarily from the reputation of Gornooryahovski Sudzhuk sausages since the time of the Bulgarian National Revival (early 18th century) and the specific conditions under which they are manufactured.

Numerous crafts connected with the manufacture of meat products have developed in Gorna Oryahovitsa from time immemorial: meat production, butchery, sudzhuk sausage making, meat curing, etc. As early as the 19th century the authorities, recognising the benefits, supported local tradesmen and craftsmen. In this way the town gradually became established as one of the biggest trading centres in the then Turkish empire by means of the construction of town markets. In 1538, Suleiman I the Magnificent issued a decree granting the Rustem Pasha Foundation lands and taxes from the production of sudzhuk sausages in Rahoviche-I Gebr (now known as Gorna Oryahovitsa). In 1861, sudzhuk sausages produced by the Gorna Oryahovitsa manufacturer and trader Mihail Nikolov were awarded a medal at an international fair in Italy.

The location of sudzhuk workshops is of enormous importance in ensuring appropriate maturing and drying conditions. This is why they underwent a lengthy process of evolution in finding favourable climatic locations within reach of Gorna Oryahovitsa. While in the beginning, during the 19th century, Gornooryahovski Sudzhuk sausages were manufactured in special workshops near the âSar Marketâ in the south-west part of Gorna Oryahovitsa, during the final decade of the 19th century and the beginning of the 20th, sudzhuk workshops were gradually relocated towards the eastern outskirts of the town. The main reason were the favourable air currents discovered by sudzhuk manufacturers, which turned out to be the most important factor in the drying of Gornooryahovski Sudzhuk sausages and in the formation of the characteristic sausage mould which coats them.