Difference between revisions of "Tagine" 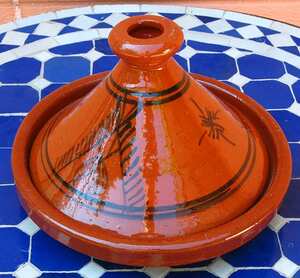 A tagine or tajine is a cooking pot found in the North African cuisines of Algeria, Morocco, and Tunisia, in which recipes of the same name are cooked. The traditional tagine pot is formed entirely of a heavy clay which is sometimes painted or glazed. It consists of two parts; a base unit which is flat and circular with low sides, and a large cone or dome-shaped cover that rests inside the base during cooking. The cover is so designed to promote the return of all condensation to the bottom. With the cover removed, the base can be taken to the table for serving.

Recently, European manufacturers have created tagines with heavy cast iron bottoms that can be used on a hob at high heat. This permits browning meat and vegetables before cooking. While the similar Dutch oven and SaÄ (a cast iron pot with a tight cover) braises most efficiently in the oven, the tagine braises best on the hob.