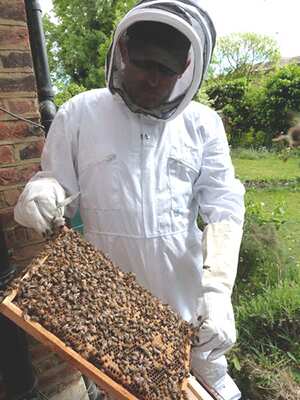 Nik and Edwina's Cookbook We are Edwina fitzPatrick and Nik Devlin. Since 1999, we've created a series of printed recipe books as Christmas presents for friends and family, but as the interest in the recipes has grown (and we'd like to be green about this) we've developed this website instead. It gets added to regularly - see the Five Latest Recipes section.

We've invented some recipes, we've inherited some, others are adapted and evolved from existing publications. Many thanks are due to friends who have passed on their recipes to us (you do get credited!), and to Crystal Palace library in London for having an excellent Food reference section too.

Another great interest of ours is travelling (a lot of the photos here we've taken in markets around the world, including the one above, taken in Fez); we've eaten some amazing food in places like India, Turkey, Egypt and Morocco. So we're including some recipes we've picked up on our travels; some dishes we've learnt by talking to chefs (and we're replicating their recipes here with their permission), some we tried to de-construct when we ate them, then cook when we got home, making them as authentic as possible.

Their recipes are so good, we have given them a category of their own: Category:Nik and Edwina's Cookbook recipes

October 2012 - the website has just been re-vamped - easier to navigate and a nice clean layout - Take a look.