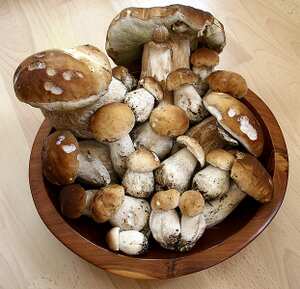 Porcini mushrooms of all sizes

Boletus edulis, commonly known as penny bun, porcino, porcini or cep, is a basidiomycete fungus, and the type species of the genus Boletus. Widely distributed in the Northern Hemisphere across Europe, Asia, and North America, it does not occur naturally in the Southern Hemisphere, although it has been introduced to southern Africa and New Zealand.

The fungus grows in deciduous and coniferous forests and tree plantations.

Prized as an ingredient in various foods, B. edulis is an edible mushroom held in high regard in many cuisines, and is commonly prepared and eaten in soups, pasta, and risotto. The mushroom is low in fat and digestible carbohydrates, and high in protein, vitamins, minerals and dietary fibre. Although it is sold commercially, it has not been successfully grown in cultivation. Available fresh in autumn in Central, Southern and Northern Europe, it is most often dried, packaged and distributed worldwide.

Boletus edulis, like its name implies, is an edible mushroom. Italian chef and restaurateur Antonio Carluccio has described it as representing "the wild mushroom par excellence", and hails it as the most rewarding of all fungi in the kitchen for its taste and versatility. Considered a choice edible, particularly in France, Germany and Italy, it was widely written about by the Roman writers Pliny the Elder and Martial.

The flavour has been described as nutty and slightly meaty, with a smooth, creamy texture, and a distinctive aroma reminiscent of sourdough. Young, small porcini are most appreciated by gourmets, as the large ones often harbor maggots (insect larvae), and become slimy, soft and less tasty with age. Fruit bodies are collected by holding the stipe near the base and twisting gently. Cutting the stipe with a knife may risk the part left behind rotting and the mycelium being destroyed. Peeling and washing are not recommended. The fruit bodies are highly perishable, due largely to the high water content (around 90%), the high level of enzyme activity, and the presence of a flora of microorganisms.