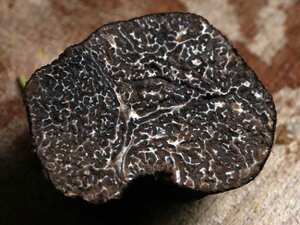 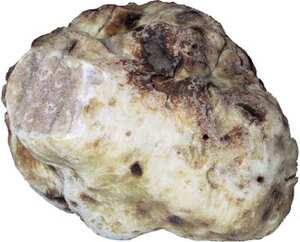 A truffle is the valuable and highly sought-after, edible fruiting body of a group of subterranean ascomycete fungi of the genus Tuber. All truffles are found in close association with trees.

The fruiting body of truffles is highly prized as a food, their smell has been described as similar to deep-fried sunflower seeds or walnuts, although it has also been described as "a foul aroma." Not all people are able to smell the �odour� of this fungus. People have noted that water that truffles have been soaked in can taste similar to soy sauce. Brillat-Savarin called the truffle "the diamond of the kitchen" and praised its aphrodisiacal powers. While their aphrodisiac properties may be unproven, truffles are nevertheless held in high esteem in French, northern Italian, as well as in international haute cuisine.

The Black truffle or Black Périgord Truffle (Tuber melanosporum) is named after the Périgord region in France and grows exclusively with oak. Specimens can be found in late autumn and winter, reaching 7cm in diameter and weighing up to 100g. Production is almost exclusively European, with France accounting for 45%, Spain 35%, Italy 20%, and small amounts from Slovenia and Croatia. The largest truffle market in France (and probably also in the world) is at Richerenches in Vaucluse. The largest truffle market in south west France is at Lalbenque in Quercy. These markets are busiest in the month of January when the black truffles have their highest perfume. Black truffles on these markets sell between €200 and 600 per kilogram, depending on the quantity and quality of the harvest.

The White truffle or Alba Truffle (Tuber magnatum) comes from the Langhe area of the Piedmont region in northern Italy and, most famously, in the countryside around the city of Alba. It is also found in Croatia, on the Istria peninsula in the Motovun forest alongside Mirna river. Growing symbiotically with oak, hazel, poplar and beech and fruiting in autumn, they can reach 12cm diameter and 500g, though are usually much smaller. The flesh is pale cream or brown with white marbling. Like the French black truffles, Italian white truffles are very highly esteemed. The white truffle market in Alba is busiest in the months of October and November. The Tuber magnatum truffles sell between €2,000 and €4,000 per kilogram. Truffle hogs have been used historically in Europe to help find truffles. However, more recently, dogs have become preferred for truffle hunting since they can be trained to just find the truffles whereas sows eat the truffles as soon as they find them.

Because of their high price and their pungent taste, truffles are used sparingly. Supplies can be found commercially as unadulterated fresh produce or preserved, typically in a light brine.

White truffles are generally served raw, and shaved over steaming buttered pasta or salads. White or black paper-thin truffle slices may be inserted into meats, under the skins of roasted fowl, in foie gras preparations, in pâtés, or in stuffings. Some speciality cheeses contain truffles as well.

The flavour of black truffles is far less pungent and more refined than that of white truffles. It is reminiscent of fresh earth and mushrooms, and when fresh, their scent fills a room almost instantly.

While in the past chefs used to peel truffles, in modern times most restaurants brush the truffle carefully and shave it or dice it with the skin on so as to use most of this expensive ingredient.

Truffle oil is often used as a lower cost and convenient substitute for truffles, to provide flavouring or to enhance the flavour and aroma of truffles in cooking. Most of the “truffle oil” used in the US however, does not contain any truffles. The vast majority is olive oil which has been artificially flavoured using a synthetic agent such as 2,4-dithiapentane.