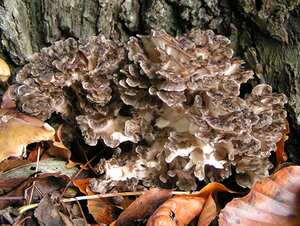 Hen-of-the-Woods mushroom (Grifola frondosa) is a polypore mushroom that grows in clusters at the base of trees, particularly oaks. The mushroom is also known as ram's head mushroom and sheep's head mushroom. It is also known by its Japanese name "Maitake", which means "dancing mushroom". It should not be confused with chicken of the woods or "sulphur shelf", another edible bracket fungus. The fungus becomes inedible like all polypores when they are older, because it is too tough to eat.

The fungus is native to the north-eastern part of Japan and North America, and is prized as a traditional medicinal mushroom, an aid to return out altered body systems to a normal level.

In Japan, the Maitake can grow to more than 20 kilograms (50 pounds), earning this giant mushroom the title "King of Mushrooms". Maitake is one of the major culinary mushrooms used in Japan, the others being shiitake, shimeji and enoki. They are used in a wide variety of dishes, often being a key ingredient in nabemono or cooked in foil with butter.